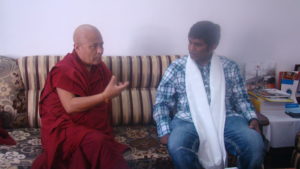 Dharamsala: Mr. Ravi Kandal, Ambassador of Peace, New York and the founder of Kingdom Foundation visited the Tibetan Parliament-in-Exile to intimate himself with the matrix of the socio-cultural and the administration of the Central Tibetan Administration as well as the Tibetan community on Oct 11.

Welcomed by the Deputy Speaker Ven. Acharya Yeshi Phuntsok, he was elucidated in detail on the development of Tibetan movement in both exiled Tibetan communities and on international platform on a larger scale. He further illuminated the visitor on the history of Tibet, the invasion of Tibet by the People’s Republic of China, segregation of Tibet into various prefectures and the hardline policies adopted by the Chinese government leading to escalated numbers of self-immolations. He also talked about destruction of Tibet’s environment and ecological system, displacement of nomads, assimilation of Tibetan language and culture as well as various hydrological projects, which also threatens the sustainability of water resources in the neighboring countries.

Mr. Ravi Kandal was apprised with the exiled Tibetan Parliamentary composition and functions, its electoral system as well as the its session.

He particularly referred to the Central Tibetan Administration’s political outlook of the Middle Way Approach and the need for resumption of dialogue between the representative of His Holiness the Dalai Lama and China in order to resolve the issue of Tibet.

The Deputy Speaker also answered the questions posed by the visitors later on.

Thereafter, he took a guided tour to the Parliamentary Hall. 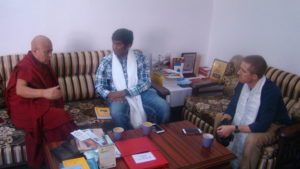