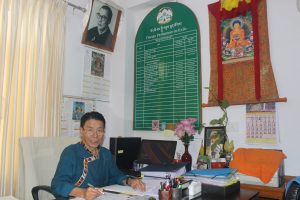 Born on the highest plateau of the world, Mr. Tsering Topgyal Lhakhang had to flee his snow-capped homeland along with his parents and siblings in 1959 as a consequence of the occupation of Tibet by the People’s Republic of China.  They traveled via Bhutan and Nepal and finally landed in Bomdila, the northeastern part of India. In 1962, the children of the road construction workers were picked up by the Tibetan government-in-exile, to send to the schools.  As one of these children, he was enrolled in a transit school at Kangra, Dharamsala and eventually the Central School for Tibetans Dalhousie in H.P. where he studied up to Class VIII.  Later on, he joined the Central Institute of Higher Tibetan Studies based in Sarnath to pursue the Tibetan Traditional learnings.  However, by then his parents were old and sick and had to be shifted to an old people’s home at Mundgod Tibetan settlement in South India.  He also moved along to look after his aged and ailing parents and subsequently joined Central School for Tibetans Mundgod and completed his IX and X classes.   He had to leave again to continue his studies at Central School for Tibetans Dalhousie.  Finally, he completed his school education with good results. So, in 1977, he got the opportunity to partake in the first recruitment exam of the Central Tibetan Administration, which he succeeded, thereby fulfilling his own and his parent’s wishes to serve the cause of the Tibetan Freedom Movement.

In summary, Mr. TseringTopgyalLhakhang has served the Central Tibetan Administration for almost 40 years with full dedication and sincerity. He has dedicated 22 years of his 40-year service in the onerous responsibility at seven most difficult places like Changthang in Ladakh, Miao in Arunachal Pradesh, Ravangla in Sikkim, Mainpat (twice) in Chhatisgarh, Bhandara (twice) in Maharashtra, Mundgod and Kollegal in Karnataka.  He has been accepting the transfer orders without any complaints, following wherever the finger is pointed.  He has been discharging his duties wholeheartedly, be it big or small, at the centre or in the community as per the kind guidance and great wishes of H.H. the Dalai Lama and policies of the Central Tibetan Administration.  He still aspires to continue his service as long as his capability and health complies.