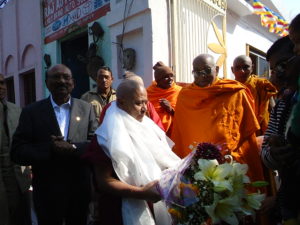 Deputy Speaker Acharya Yeshi Phuntsok being welcomed upon his arrival at the International Buddha Educational Institute (IBEI), Hapur, UP. (dt.20/01/18)

He was warmly received by its Director, Rev. L. Ashvanghosh, member of Minority Commission, Govt. of Uttarakhand and other dignitaries upon his arrival at the institution.

The inauguration of the newly-built library began with the benedictions to invoke divine blessing by the Buddhist monks and thereafter, the Chief-Guest Ven. Acharya Yeshi Phuntsok formally inaugurated the library. 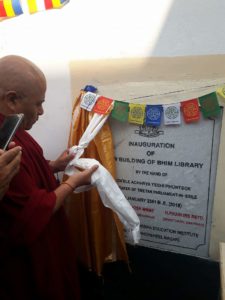 At the inauguration ceremony, Retd.IRS and former Director of IBEI, Dr. H.P.Kain initiated the ceremony with an introductory and a welcome speech, which was followed by the speech of Deputy Speaker Ven. Acharya Yeshi Phunstok.

He expressed his greetings as well as his utmost delight for being present at the momentous ceremony on behalf of the Tibetan Parliament-in-Exile. He addressed the audience on the evolution of library, which first began as the private libraries of the rich, collecting prized and celebrated work of arts and became more and more accessible to the public as different libraries started appearing in the 5th Century. Citing examples of the various types of libraries, viz., National Library, Research Library, Children’s Library, Public Library etc., he stated that the libraries as the place for study and reference emerged especially after the 13th Century, when both the government and public alike, started expanding it. 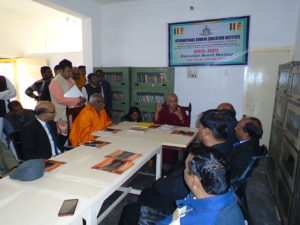 Deputy Speaker speaking to members of the International Buddha Educational Institute (IBEI), Hapur (UP) on 20 January 2018.

“Library, intended for the learners and the learned, should not be subverted into the functions of museums and exhibitions. Therefore, the scholars and learned here should set examples and utilize it to the best by going there and reading and studying in your daily life. I hope the locals would also be able to utilize the library to its optimal”‘, said the Deputy Speaker.

He added that the almost-fifty books on and about His Holiness the Dalai Lama, Tibet’s culture and religion, present situations in Tibet, self-immolations, the struggle for Tibet’s cause and the India-Tibet relations, which he donated to the library will be read and put to good use.

He expressed his heartfelt gratitude to the International Buddha Education Institute and the District’s officials for supporting the Tibet’s cause and issue as well as for facilitating the seasonal Tibetan sweater-sellers in winter and added that he hopes for such support to continue in the future too.

The ceremonial occasion concluded with Rev. L. Ashvaghosh, Chairman of International Buddha Education Institute and a member of the Minority Commission,Govt. of Uttarakhand, expressing his pleasure at the presence of numerous High Tibetan  Lamas and the Deputy Speaker of the Tibetan Parliament-in-Exile as per the invitation proffered in the past till today. He assured the continuity of his support for the Tibet’s cause and its issue.

Thereafter, Deputy Speaker presented certificates to the member of the institute and also presented the Chairman and the Vice-Chairman of the institute with the mementos of Tibetan Parliament Secretariat. Thus, the inauguration ceremony concluded successfully. 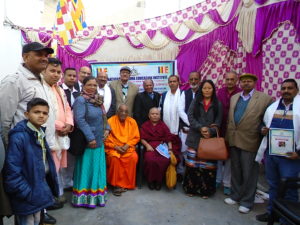 Deputy Speaker with members of the International Buddha Educational Institute (IBEI), Hapur (UP) on 20 January 2018.