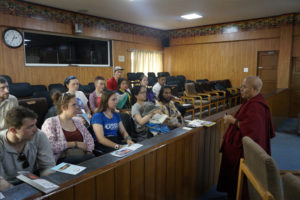 Dharamsala: A group of 13 students from three different countries visited the Tibetan Parliament-in-Exile, led by Mr. Tenzin Dakpa, the program coordinator of Students for a Free Tibet on May 28, 2018.

They were greeted and welcomed to the Tibetan Parliamentary Secretariat by the Deputy Speaker of the 16th Tibetan Parliament-in-Exile, Acharya Yeshi Phuntsok. Addressing them on the evolution of democracy in the Tibetan polity, he elucidated them on His Holiness’s endeavor to bring about reform within the Tibetan society in 1952, which was interrupted due to the Chinese invasion and the formal introduction of the outline of democratic polity to the Tibetan public at Bodh Gaya, India in February 1960, following His holiness the Dalai Lama’s escape from Tibet to exile in India in 1959.

‘His Holiness the Dalai Lama advised the exile Tibetans to set up an elected body comprising three exile representatives from the three traditional Tibetan provinces and one each from the four schools of Tibetan Buddhism. And based on that advice, elections were duly held and 13 representatives termed, ‘Deputies’ were elected, who took their oath on September 2, 1960. This historic day is now celebrated as ‘Tibetan Democracy Day. Thereafter, in 1991 Charter of the Tibetans-in-Exile, was formally adopted, which has, till now, passed 28 additional legislation. In 2001, Tibetans had their first directly-elected Kalon Tripa and in 2011, His Holiness the Dalai Lama devolved his entire political and administrative authority to the elected Tibetan leadership,’ continued the Deputy Speaker.

He then briefed the students on the Tibetan Parliament-in-Exile. He talked about the two parliamentary sessions and the strength of the current Parliamentary and its Standing Committee members. He also breifed them on its functions, including the liaison with different governments, parliaments, NGOs and individuals throughout the world in order to garner support for the cause of Tibetan and periodical Tibetan settlement visitation program to assess the grievances of the general Tibetan people.

On various Tibet support groups, he said, ‘There are three different types of Tibet support groups. These are World Parliamentarian Convention on Tibet (WPCT), Tibetan Support Group and Students of Free Tibet.’ He then went on to elaborate on the difference between each of them. He also informed them on the 152 self-immolation inside Tibet as well as on the Middle-Way Approach.

At the conclusion, he requested them to support Tibet cause after knowing all the facts and the truth as they return to their respective countries. 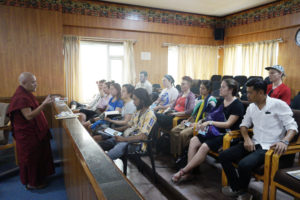