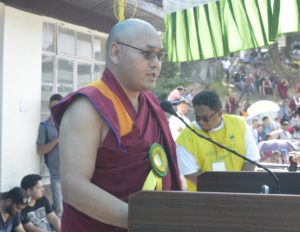 Dharamsala : Speaker of 16th Tibetan Parliament -in-Exile, Khenpo Sonam Tenphel graced the closing ceremony of the Final ‘Thank You India’ Tibetan football tournament as its ‘Chief Guest’ on June 10 at Upper TCV as per the invitation proffered by the Tibetan Youth Congress.

The tournament began with a friendly match between Indo-Tibet Friendship Association and the team that represented the Tibetan NGOs.

Upon the arrival of Chief Guest, Speaker Khenpo Sonam Tenphel, the scheduled program commenced then with the singing of national anthem and an observation of a minute-silence to mourn for the Tibetan martyrs. Thereafter, greeting the gathered guests and audiences on behalf of Tibetan Parliament-in-Exile, Speaker Ven. Khenpo Sonam Tenphel reiterated the Tibetan Youth Congress aims and objective of promoting health awareness and unity among the Tibetan youth and especially to support ‘Thank you India’ campaign of Central Tibetan Administration as he commended the Tibetan Youth Congress for the organization of the football tournament. 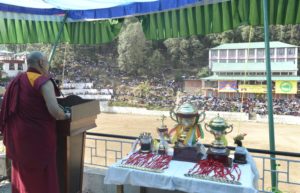 He said, ‘As a political refugee, our habitation especially of His Holiness the Dalai Lama and the nexus of Tibetan administration is in India and now nearing 60 years into exile in India, the government and people of India had been abundantly generous and grateful to us. For instance. after 1959, in the 1960s and 1970s, when the unique culture, tradition and language of Tibet was seemingly obliterated with the adoption of various policies by the Chinese government, however, by the grace of His Holiness the Dalai Lama, toils of our elder generations, high lamas and especially the requisite facilitation of the government an the people of India, the religion and culture of Tibet has engaged the attentions from various renowned scholars and thereby, becoming a focus of attention nowadays. Such feats transpired because of the necessary facilitation by the Indian government and its people. Therefore, we should indeed be very grateful to them. It is of utmost importance to live in harmony with the people of our host country for this is the truest representation of thanking India and its people.’

‘We have the capability and potential to make Tibet as the spring of peace or its bridge in the South-East Asia if we get independence one day and it would happen consecutively so. Therefore we must work diligently and enthusiastically towards our common struggle movement without ever losing heart,’ he continued. 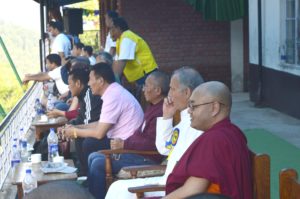 Commending the contenders of the tournament from the organization’s 16 different chapters around India, he stressed on importance of nurturing and supporting the interest of any children or students in different field of sports or arts by their parents or schools. He also mentioned the participation of Tibetan Men’s National Football Team participation in the CONIFA Paddy Power World Football Cup 2018 tournament and commended them on their participation as he stressed on the significance of participating in various competitions. 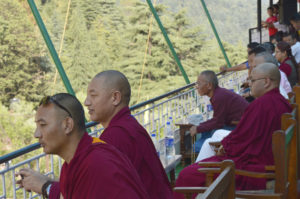 ‘Victory Team’ representing the Chakrata based Special Frontier Force (Est 22) took the tournament’s cup against Dekyiling RTYC in a hard-ought match between the two, thus, ending the ten-days tournament. 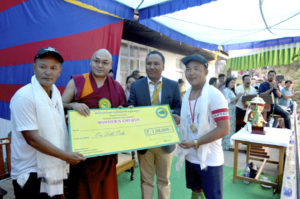 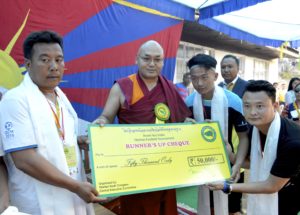 Speaker awarding the prize money for Runner’s Up team i.e., Dekyiling RTYC Team of the Thank you India Football tournament. 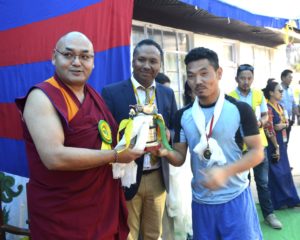 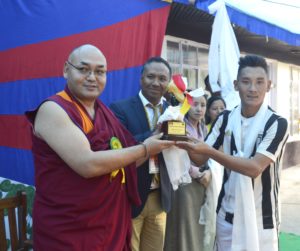 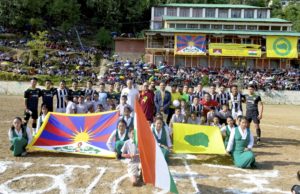