Dharamsala : Upon the arrival of 16th Tibetan Parliament-in-Exile’s Speaker Ven. Khenpo Sonam Tenphel at Mysore on July 17, he was greeted and received by the Chief Representative of Southern Tibetan Settlements, along with members of Mysore Tibetan Students Association, Tibetan Sweater Sellers’ Association and the Presidents of both center and local National Democratic Party of Tibet. Thereafter, at upon reaching Lugsam Samdupling Tibetan settlement’s office in Bylakuppe, he was welcomed by representatives of different monasteries, resident Parliamentarians, Tibetan Settlement Officers of both Lugsam Samdupling Tibetan settlement and Dickyi Larsoe Tibetan settlement, Presidents of Co-operative Societies, Directors of clinics and other institutions as well as camp leaders and students. 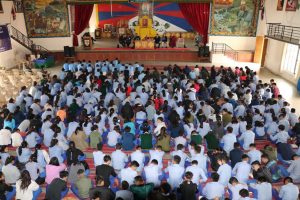 Speaker talking on ‘Democracy and Unity’ to the Tibetan students at Bylakuppe on July 17, 2018.

Subsequently, under the organization of National Democratic Party of Tibet’s (NDPT) ‘Democracy and Unity’, Speaker elucidated the students from different Tibetan schools on the evolution of democracy; its definition and characteristics; Philosophical significance of Democratic polity ; Concordant and Discordant factors in unification; Inner and Outer Discordant factors; and necessity of concordant factors in the process of unification. All the questions raised by the students were duly answered by the Speaker during the Q&A session. Thereafter, he paid visit to the TCV and Sambhota Tibetan schools as well as Lugsam Old-Age home. Later in the evening, Speaker spoke on the same topic to the monks and nuns of Namdrol-ling Monastery. 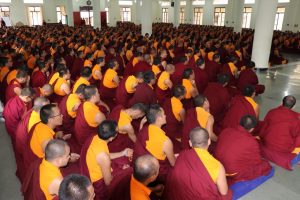 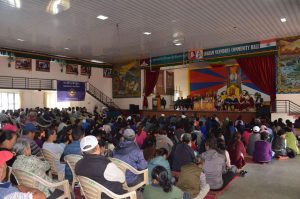 Tibetans from both Lugsam and Delar gather together at former’s community hall to listen to Speaker’s speech on ‘Democracy and Unity’ on July 18th.

Later in the evening, he also inspected the ongoing Housing project for the newly-arrived Tibetans at the settlement. 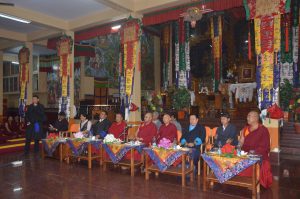 He, then addressed the monks at Sera Thekchenling. Respective H.E. Khen Rinpoche (Abbots) of Sera Jey and Sera Mey were also present, who delivered the welcome and concluding speech respectively. In accordance with the invitation accorded, resident Parliamentarian Mr. Pema Delek also spoke on ‘Democracy and Unity’ at the gathering of Tibetan public at Bylakuppe. 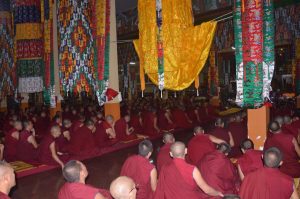 On July 19, after paying visit to the Regional Tibetan Freedom Movement, residing member of Tibetan Parliament, concerned Tibetan Settlement officers of the two Tibetan settlements as well as the Tibetan public of Bylakuppe saw off the Speaker of the 16th Tibetan Parliament-in-Exile, who set out for Rabgyeling Tibetan settlement, Hunsur. He was greeted at the said settlement by H.E. Khen Rinpoche (Abbot) of Dzongkar Choede monastery, Steward of Gyumed monastery, Chairman of Local Tibetan Assembly, Tibetan Settlement Officer, Director of the Co-operative Society as well as by the members of various other organizations. Thereupon, Speaker addressed the public of both lay and monks at the settlement’s community hall on the designated topic of ‘Democracy and Unity’. He also engaged in Q&A session with the public. 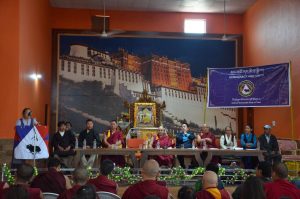 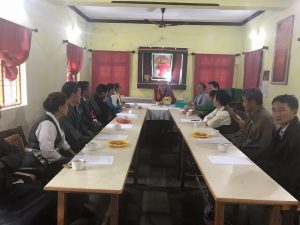 Speaker addressing the members of LTA on the power and responsibilities of the Local Tibetan Assembly on July 19th. 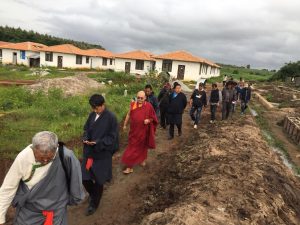 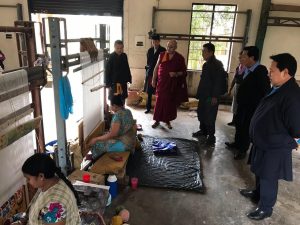 Inspecting the small-scale factories under the Co-operative Society in Bylakuppe on July 18th. 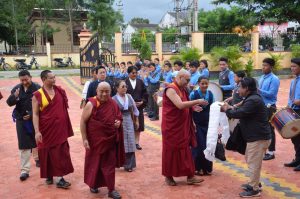 Speaker being welcomed with school band as he visits Sambhota school in Hunsur on July 19th.