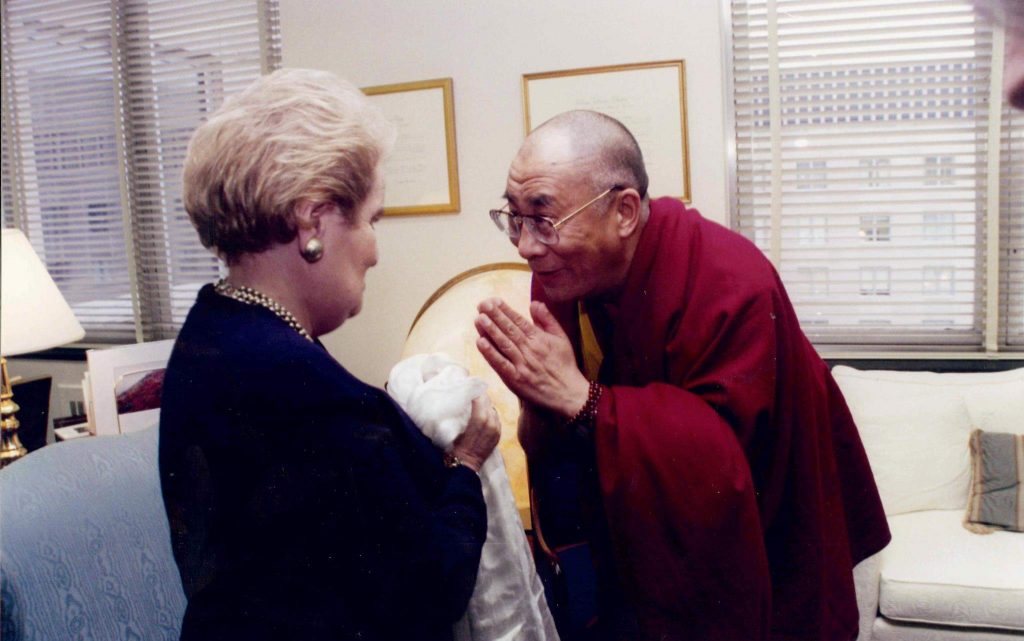 His Holiness the Dalai Lama with the former US Secretary Madeleine Albright.

Dharamsala: Khenpo Sonam Tenphel, the Speaker of the Tibetan Parliament-in-Exile, extended his heartfelt condolence on the demise of Madeleine Albright,  the first female US Secretary of the State who passed away at the age of 84.

In a condolence letter written to the former US Secretary’s daughter, the Speaker wrote, “We are saddened to learn the demise of your beloved mother Madeleine Albright, former US Secretary of the State. On behalf of the Tibetan Parliament-in-Exile, I extend my deepest condolence to you and your family.”

“Mrs. Maldeliene Albright’s service to the country is profound and she has lived a great life by contributing to the welfare of the country and its people. She has touched great heights in her career and her legacy will live on. Mrs. Albright has also supported the Tibetan cause during her tenure in the Office of the Secretary. She has appointed Mr. Greg Craig, the first special coordinator for Tibetan Issues at the U.S. Department of State in October 1997 under the Clinton Administration. She made it clear to the then President of China Jiang Zemin that Tibet is in the high priority of the U.S government and urged for dialogue with His Holiness the Dalai Lama.”

“She has met with His Holiness the Dalai Lama several times in the past and His Holiness has appreciated her concern and effort for Tibet. Her support and commitment to the cause of Truth and Non-violence will be remembered by all the Tibetan people. We are grateful for her support and with her passing away, we have also lost a true friend of Tibet.”

“Once again on behalf of all the Tibetans around the world, I extend my sincere condolence. I send my prayers and strength to you during this difficult time.”