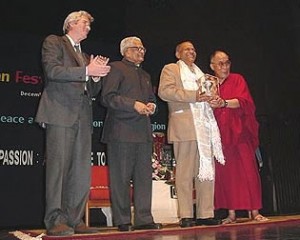 Source : www.tibet.net   DHARAMSHALA: The Deputy Speaker of Tibetan Parliament-in-Exile, Acharya Yeshi Phuntsok today expressed his deepest condolence at the demise of Shri Rabi Ray, former speaker of the Lok Sabha, former Union minister and president of Indo Tibet Society. The noted socialist leader passed away on Monday due to age-related ailments. He was 90.

In a letter to Smt Dr Saraswati Swain, wife of late Shri Rabi Ray, the deputy speaker wrote, “The Tibetan Parliament-in-Exile is deeply saddened at the demise of Shri Rabi Ray, an Indian socialist politician, a Gandhian, former speaker of the Lok Sabha, former Union minister and president of Indo Tibet Society.

“He was a staunch supporter of Tibetan Cause and a good friend of His Holiness the Dalai Lama. His loss is not only an irreparable loss for you and India but also for the cause of Tibet. We are with you in this hour of grief,” the Deputy Speaker wrote.