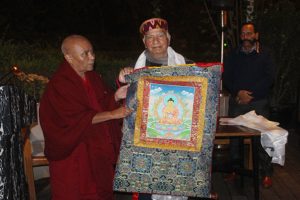 New Delhi: The Tibetan Parliament-in-Exile organized a dinner get-together in honour of the members of Indian Parliament at Shangri-la Eros Hotel on 6 January. 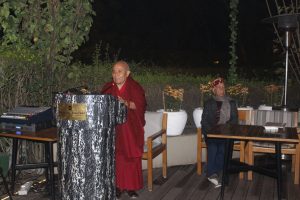 Deputy Speaker Acharya Yeshi Phuntsok welcomed the members and briefed about the establishment of All Party Indian Parliamentary Forum for Tibet (APIPFT) in 1970.

He said, “The Tibetan Parliamentary Delegation has called upon 270 Indian Parliamentarians from both the houses in the last 5 years from 2014 to August 2018 at Delhi and 8 APIPFT meetings were held and in which several resolutions were passed. As per in the resolutions, the members raised the Tibet issue in the parliament sessions and visited Dharamsala during the Tibetan occasions and on-going Tibetan parliament session. There are two more resolutions left to follow up i.e. to invite His Holiness the Dalai Lama to address the Parliamentarians in any of house or Annexe and to confer Bharat Ratna, India’s highest civilian award, for His Holiness the Dalai Lama.

He further expressed his delight in organising the dinner gathering for all the APIPFT members. He mentioned that it will be 60 years in exile on 10th March since His Holiness the Dalai Lama’s escape from Tibet and thanked all the members on behalf of Tibetans in and outside Tibet for all the support extended towards the Tibetan for the last 60 years.

“The current situation inside Tibet is deteriorating under China’s crucial laws. But the Tibetans aspiration to resolve the Tibet Issue is still very strong and Tibetans in exile are striving to bring the Tibet case in the international platforms. Because of the successful work of APIPFT, several Parliamentary Support Group for Tibet in various countries was established.” He again thanked the members for gracing the dinner gathering with their presence. 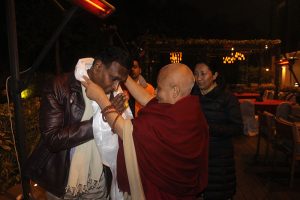 Hon. Shanta Kumar in his speech said he is pleased to get the opportunity to be the convener of the APIPFT from 2014. He further iterated that Dharamsala being the residence of His Holiness the Dalai Lama, people from across the world come to Dharamsala.

He also said the struggle to resolve the Tibet issue should continue and China should resume the dialogue with the representative of His Holiness the Dalai Lama.

Acharya Yeshi Phuntsok thanked Hon. Shanta Kumar for being the convener of APIPFT and for being a staunch supporter of our cause and presented a Thangka. He then presented a scarf and a book “Freedom in Exile” to all the members.

The Standing Committee members of Tibetan Parliament, who arrived in Delhi on 2 January, were divided into 5 groups of four members each. The first group led by Speaker Pema Jungney, Dy. Speaker Acharya Yeshi Phuntsok and Parliamentarian Ven. Kada Ngodup Sonam was accompanied by staff of Tibetan Parliamentary Secretariat Kalsang Youdon and Tenzin Paljor.

The third group led by Ven. Tenpa Yarphel and Ngawang Tharpa were accompanied by Karma Dhargyal, Director of ITCO and Lobsang Nyima of Tibetan Parliamentary Secretariat.

The fourth group comprising of parliamentarians Tsanaetsang Dhondup Tashi and Karma Gelek were accompanied by Tenzin Paljor of ITCO. The fifth group comprise of Geshe Atuk Tsetan and Konchok Yarphel and Tsering Lhakyi and Tenzin Choeying. 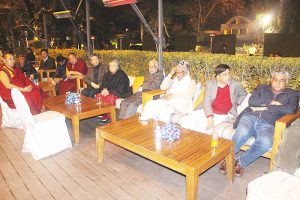