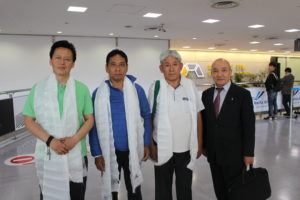 On the arrival on a pleasant weather at Narita International Airport, the delegation was welcomed by Mr Lungtok, Representative of His Holiness the Dalai Lama and staff of the Office of Tibet.

On 25 April, the delegation will visit the office of Tibet and Representative Mr. Lungtok will apprise them about the working of the office.

On 26 April, the delegation will meet the board members of the Japan and Tibet Parliamentary Group for Tibet at the House of Representative, Parliament building. Later, they will meet with Ms. Sakurai Yoshiko, President of the Japan Institute of National Fundamentals, a think-tank in Japan, and a long-time supporter of the Tibetan people.

The delegation will also visit educational and cultural centres around Japan during their maiden visit to Japan.

(Report filed by the Office of Tibet)