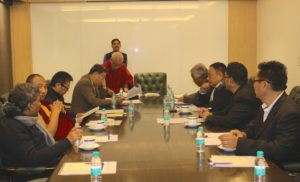 At the APIPFT meeting held on Dec 21 at Constitution Club of India, New Delhi.

During the meetings with the Indian lawmakers, the Tibetan delegates formally thanked the Government and the people of India for their continuous support for Tibet and the Tibetans and apprised them on the critical situation inside Tibet and the ongoing Tibetan freedom struggle. While advocating for greater support for Tibet, the delegates urged them to stand up for Tibet by taking up the issue of Tibet during the Parliamentary proceedings and bolster their support for Tibet through various platforms. The delegates also solicited the members to seek further support for Tibet from their respective leaders and Government for immediate intervention to end the crisis inside Tibet.While deliberating on Tibet, the Tibetan lawmakers submitted petitions, distributed copies of information booklets and books on Tibet; and offered souvenirs and mementos as a mark of greetings. 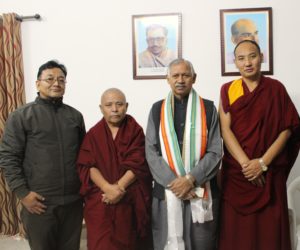 During the entire campaign, the delegates were received with great warmth and admiration by the Indian counterparts and were assured of their strong support and solidarity for the Tibetan cause. They earnestly pledge to do their utmost for Tibet. They also emphasised that they be kept updated on the Tibet situation and to call on at regular intervals in future. They especially assured that they would discuss and deliberate on Tibet issues with their colleagues, Party leaders and the Government of India whenever opportunities arise. Many earnestly offered their valuable guidance regarding the future course of actions for Tibet. For example, Shri  Vivek Tankha, the Senior Advocate at Supreme Court of India, suggested that a formal meeting of certain number of Indian MPs with His Holiness the Dalai Lama, coinciding with His visit to Delhi, to discuss ways to create momentum for Tibetan freedom struggle would be a major bolster for the Tibetan movement.

During the meetings, the Indian leaders while commending the successes of exile Tibetan movements and the undying spirit and commitment of the Tibetans in carrying forward the Tibetan freedom struggle, expressed anguish and condemnation at the Chinese illegal occupation of Tibet. Most importantly, the Indian MPs assured their participation in the upcoming 7th World Parliamentarians’ Convention on Tibet (WPCT). 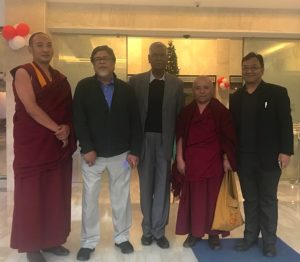 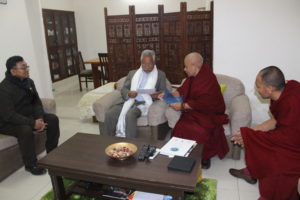 “The current Advocacy campaign proved a major success with meetings and interactions being successfully held with over 40 Indian lawmakers in a short span of 5 days. Most importantly, as requested, many Indian MPs affirmed their visit to Dharamshala in future and to participate in Tibetan official programmes and events of the exile Tibetan communities and Administration. These visits has helped garner major Tibet supporters among the Indian lawmakers in the past.” said Deputy Speaker Acharya Yeshi Phuntsok, the head of the delegation. 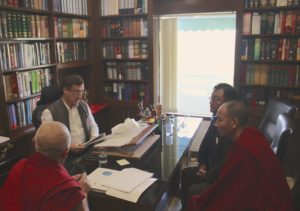 In the evening of Dec 21, a meeting of the members of All Party Parliamentarian Forum for Tibet (APIPFT) was held in the Constitutional Club, where over 7 Indian Parliamentarians including Mr. P.D.Rai, Dr. Arun Kumar, Mr. Ninong Ering, Mr. Ravi Prakash Verma, Mr. Thangso Baite etc. took part and deliberated on the issues of Tibet. Due to sudden extension of the Parliament session over a voting motion on a vital Bill, many lawmakers who confirmed their participation failed to make it in time for the meeting. The meeting successfully adopted four resolutions on Tibet. The meeting was also participated by the Tibetan Parliamentary delegations, Mr. Dhonchung Ngodup, former Minister and Representative of Bureau of His Holiness the Dalai Lama in Delhi and the Coordinator, Mr. Karma Thargyal and other staffs of ITCO. 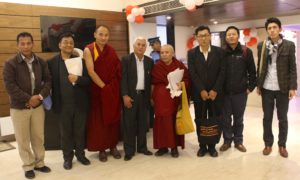 The Tibet Advocacy campaign was held in association and coordination with the Delhi based India-Tibet Coordination Office (ITCO) of Bureau of His Holiness the Dalai Lama, under Department of Information and International Relations of Central Tibetan Administration (CTA).