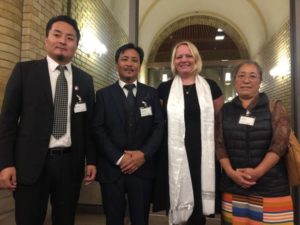 Oslo, Norway: The Tibetan parliamentary delegation to Norway, comprised of Parliamentarians Mr. Dhondup Tashi and Mr. Lobsang Choejor and led by Parliamentarian Mrs. Tsering Youdon has wrapped up their official program at Norway on Oct 7.

Upon their arrival at Oslo, the capital of Norway on Oct 4, the delegates were warmly welcomed by Ms. Lobsang Palmo, President of The Tibetan Community and its executive members. 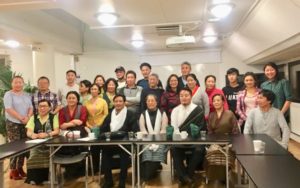 Tibetan parliamentary delegation with the Tibetans residing in Norway on Oct 5.

On Oct 5, the delegates met with the Tibetans residing in Norway and briefed them on Middle Way Approach, importance of unity and on the sixth session of the 16th Tibetan Parliament-in-exile, in particular the various legislative amendments pertaining to the Electoral rules and regulations. They also engaged in interactive question and answer session between each others.

Thereafter, they called on Norwegian politician Mona Fagerås, Socialist Left Party Education Political Spokesperson and discussed on various issues for about an hour. In the same afternoon, they met with the Chairmen and members of Tibet Support Committees and held a meeting, whereby the delegates praised the concomintance of positive changes brought about in the world by the Norwegian Peace Committee’s undeterred efforts in awarding Nobel Peace Prize to the leaders from all over the world. Both the sides concord in the expression of their gratification over the genuine bond shared between His Holiness the Dalai Lama and the people and the government of Norway and its significance as well. 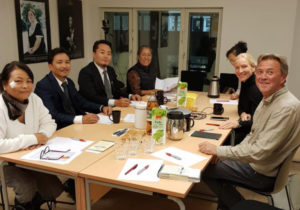 The delegates discussing on various issues of Tibet with the members of The Tibet Support Committee on Oct 6.

The delegates also detailed the urgent situation inside Tibet and the present circumstances of Tibetan polity after the devolution of His Holiness the Dalai Lama political and administrative authority to the elected representatives of Tibetans as well as the reasons for the adoption of Middle Way Approach. They also informed them on the three pillars of Tibetan democracy and the status of Tibet-China dialogue.

On Oct 7, the delegates set out to continue with their official program at Denmark from Norway. 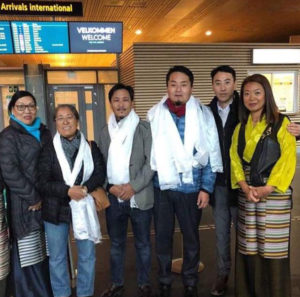 Tibetan Parliamentary delegation being welcomed warmly with Tibetan traditional scarves by members of The Tibetan Community at Oslo airport, Oslo on Nov 4.