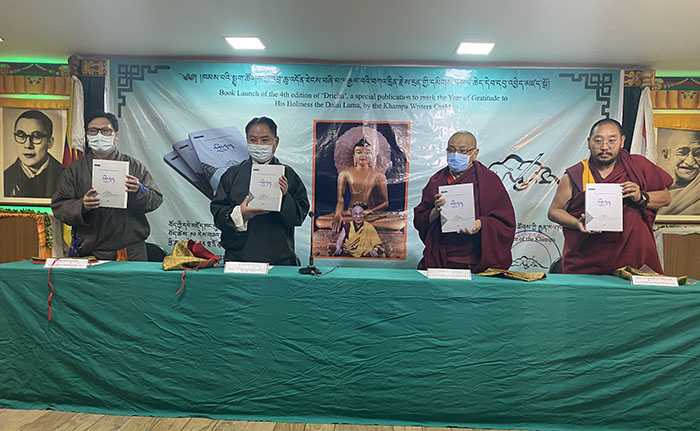 Dharamsala: The 13th working committee of the Khampa Writers Group launched a special publication book entitled ‘Drichu’ to mark the year of gratitude to His Holiness the Dalai Lama at the Library of the Tibetan Works and Archives (LTWA) on 22 Feb 2021. 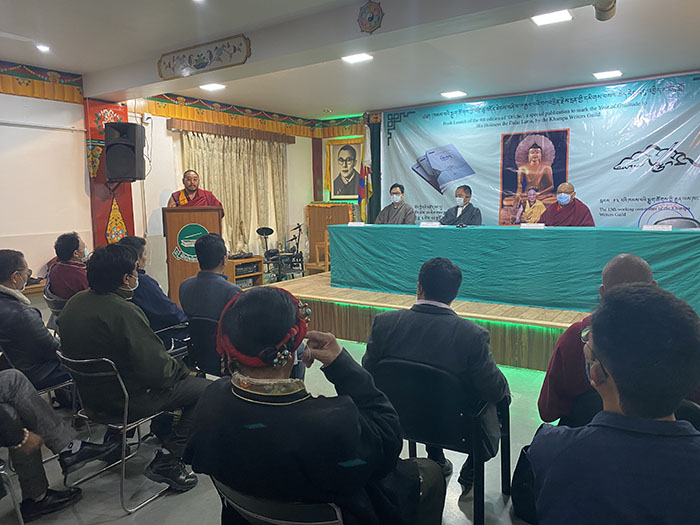 The Chief Guest Speaker Pema Jungney in his address lauded the fourth edition of ‘Drichu’ which comprises compositions on the four commitments of His Holiness the Dalai Lama, analytical essays, poems, and translations. There were around 11 analytical essays starting with the analysis on ‘the Powerful oath undertaking’. Likewise, it also has 30 poems and 2 translations. The Speaker also lauded the 47 writers for their dedication and hard work. 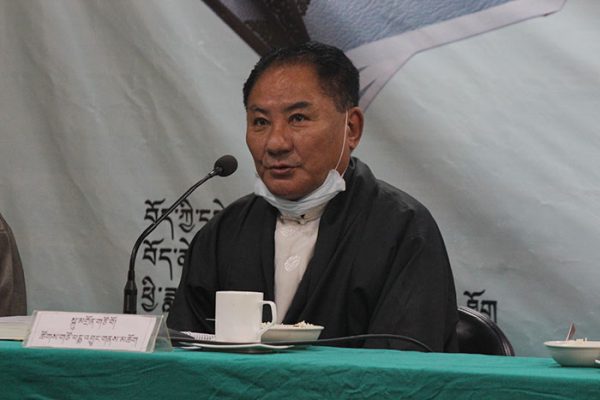 ‘As the analytical composition starts with analysis on ‘the Powerful oath undertaking’ or ‘Naghen Thumo Che’ in Tibetan, which was sworn by a gathering of representatives from all the three traditional provinces and all the religious sect of Tibet in Bodhgaya on 3 February 1960, supplicating His Holiness the Dalai Lama to lead the Tibetans and at the same time vowing to stay united and bonded strongly like a metal globular mass. Therefore, unity among the exiled Tibetans is very important,’ added the Speaker.

Speaking on the importance of preserving the Tibetan language, the Speaker advised writers to write more compositions and publish more such books as the saying in Tibetan goes, the three learned actions are explanation, debate, and composition. Seeing some spelling errors, the Speaker being an experienced editor himself advised the writers to be extra attentive in the proof-reading part as spelling errors in Tibetan composition are apparent. 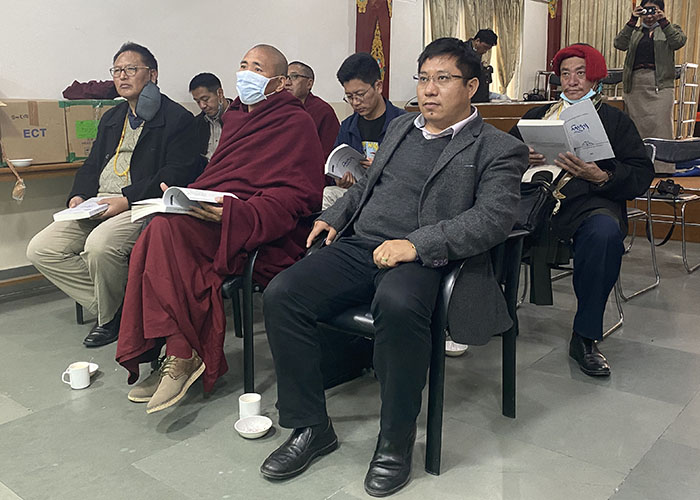 Speaking in honor of the ‘gratitude year’ to His Holiness the Dalai Lama, the Speaker emphasized acknowledging the kindness and great deeds of His Holiness to the Tibetans in order to pay gratitude to Him. At the mere age of 16 (Tibetan) or 15 (International), His Holiness the Dalai Lama was weighed down with the spiritual and secular responsibility of a politically torn and tattered Tibet which was like a butter lamp about to be extinguished. His Holiness, who was a teenager at that time, initiated political reforms in Tibet and had to accommodate differences with the Chinese even in such an emergency situation.  Even after coming into exile to India, His Holiness has worked tirelessly on establishing separate Tibetan schools, Tibetan settlements, monastic institutions, etc. with the far-sighted vision of protecting and preserving Tibetan culture, religion, and language. When monks faced hardships due to unbearable heat in re-establishing monastic institutions in Buxa Fort, visitations were made around the Himachal Pradesh to relocate monks of Buxa Fort. It was then the CM of Karnataka S. Nijalingappa who offered land in his state for Tibetan settlement and thus big monastic institutions were set up in Karnataka. As His Holiness the Dalai Lama is the ultimate saviour, leader, and guardian for the Tibetans, it is our responsibility to practice what He preaches. Especially, understanding and practicing the four commitments of His Holiness is the best rejoiceful offering to Him. Therefore, we should always study and put into practice his teachings, especially when His Holiness is at such an advanced age, we, Tibetans should strive not to disappoint him in any way. Even though His Holiness has been predicted to live beyond 116 or 125 years and His Holiness confirms the same, it is our responsibility to fulfil it by following his advice. Lastly, the Speaker prayed for a long life of His Holiness the Dalai Lama and spontaneous resolution of the Tibet issue. 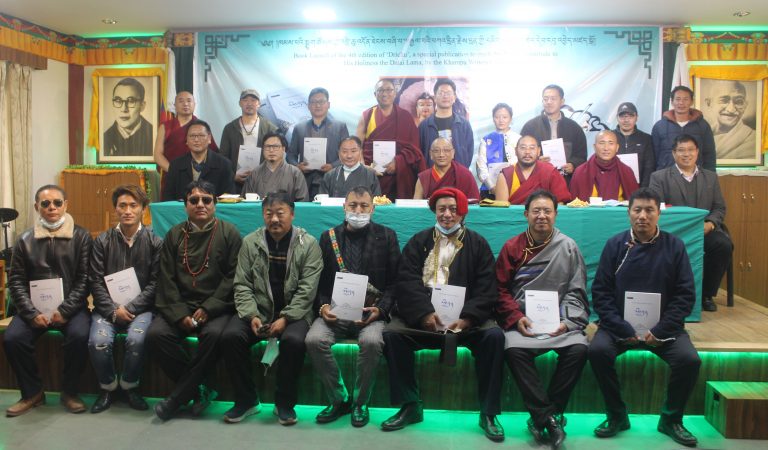 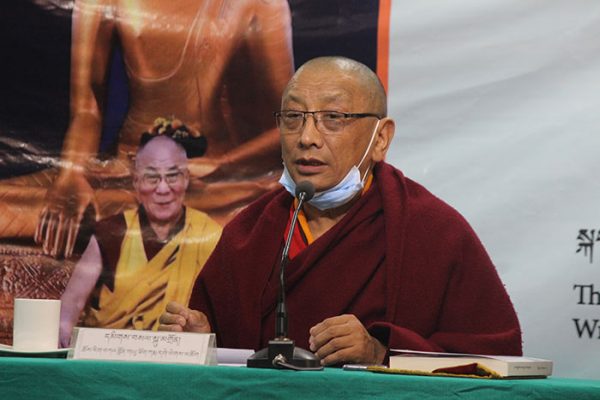 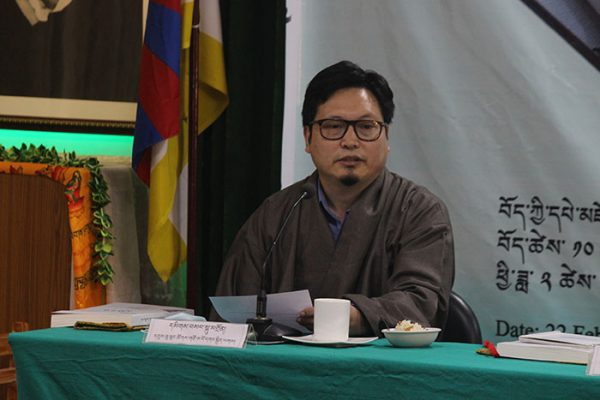