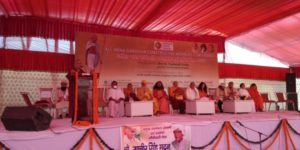 Delhi: As per the invitation extended by the Harijan Sevak Sangh, Deputy Speaker Ven. Acharya Yeshi Phuntsok attended the All India Gandhian Constructive Workers’ Conference at Gandhi Ashram from Nov 25 to 26 as its Guest-of-Honour.

On his arrival at Delhi, he met with Shri Satish Kumar, personal asistant to Shri Shanta Kumar, Conveyor of All Party Indian Parliamentarian Forum for Tibet in accordance with his instruction.

The next day upon his arrival at the Ashram, he was introduced to the Chairman of Harijan Sevak Sangh and its members. He also met with the Vice President of India, Shri M.Venkaiah Naidu, who was the Chief Guest of the conference before the onset of the program. The members of India-Tibet Coordination Office circulated books and publications related to Tibet-issues. 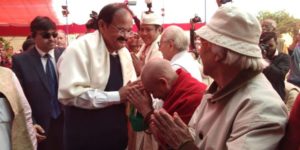 Along with its Chief-Guest Vice President Shri M. Venkaiah Naidu, the conference was attended by Chief Gurus of different religions, ministers from the Central Government, members of parliaments, think-tanks as well as specially-invited speakers from abroad. In addition to over-hundred speakers, around 600 followers from Ghandian Ashram, Acharya Vinoba Ashram and Smt. Nirmala Despande, located all over India, also attended this conference.

The conference opened with the inaugural speech from the Chief Guest Vice President Shri. M. Venkaiah Naidu, followed by sequential speeches by the respective Gurus, ministers and parliamentarians. H.E. the Drikung Kyabgön Chetsang Rinpoche also addressed to the gathering. Following which, Deputy Speaker greeted the gathering.

“Since the imminent speakers before me had already talked on the legacy of helping the society through non-violence by Mahatma Gandhi, Acharya Vinaba Bhave and Smt. Nirmala Deshpande in great length, I will not delve any further. For those attending today’s conference are all practitioners and researchers on his noble legacy, I don’t see the need for further divulgence. Mahatma Gandhi, who sought India’s independence with the power of non-violence, now has followers throughout the world. Even His Holiness the Dalai Lama steadfastly follows the path of Ghandian Non-Violence to resolve the Tibet-China issues.”

He further added, “Rather than just debating and discussing over Gandhi’s noble legacy, practicing those ideals in one’s routine lifestyle is even more essential in a free country like yours. Even though I never had the opportunity to meet such historic figures like Mahatma Gandhi and Acharya Vinoba Bhave, however, in 1997 I had the opportunity to meet the late Smt. Nirmala Deshpande while campaigning for Tibet-issues at Rajgarh. At that time, she addressed not only on the struggles for the Tibet cause but also went on to render her full support to it thereafter. She often met with His Holiness the Dalai Lama as well. During a Tibetan parliamentary delegation to Delhi, I met her there again. She not only raised the issue of rendering support to Middle Way Policy to resolve the Tibet-China issue during a parliamentary session with signed petitions of several parliamentarians but also offered her support to the other needful countries wherever required while she was alive. Her residence always felt like a welcoming public-abode.”

“As an exiled Tibetan parliamentarian, I will neither be able to divulge on the critical situation inside Tibet in detail nor will time allow me today. However, I would like to take this opportunity to thank both the people and the government of India for supporting the cause of Tibet and appeal you all to raise the awareness on Tibet’s cause and its struggle as you return to your respective residences.’’ said the Deputy Speaker.

Thereafter the conclusion of the conference, the Deputy Speaker met with several other members of the Indian parliament. 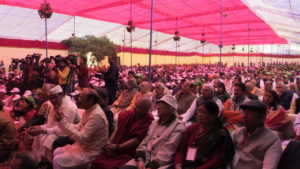 More than 100 Speakers and 600 followers of Ghandhi, Vinoba Bhave and Sm,. Nirmala Despande attended the conference.