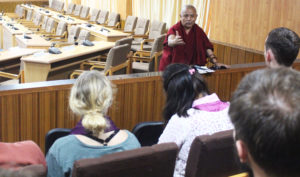 Dharamsala : Deputy Speaker of Tibetan Parliament-in-Exile, Acharya Yeshi Phunstok, met with 15 members of Taiwan based Students of Free Tibet escorted by the Dharamsala-based Students of Free Tibet in the Parliament hall of the Tibetan Parliament-in-exile at 9 am.  He again met with a group of students from various universities of United States, Canada, Australia and Mexico with 2 escorts from Tibet World, an NGO based in Dharamsala at 2 pm today.

The Deputy Speaker apprised them about the evolution of democracy in exile, the proceedings of parliamentary sessions, its two sessions and their respective features, the history of Tibet as well as the current situation of Tibet. He also briefed them regarding the Middle-way approach, the source of financial aids and the various international support groups of Tibet.

He concluded by appealing the visitors to support Tibet by researching the historical facts of Tibet as an independent country before the Chinese occupation in 1959. He said “general public are the kingmaker” and to convince their leaders to support the cause of Tibet based on its historical facts upon their return to their respective countries.