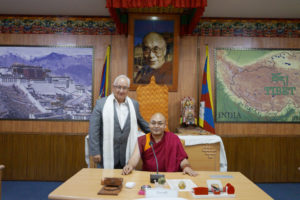 During the meeting, Speaker briefed the Australian Mp on religious freedom inside Tibet, stating ,’Despite the Chinese government’s attempt to obliterate Tibetan Buddhism in Tibet in 1960s by demolishing about 6000 Tibetan monasteries and imprisoning high lamas, Tibetan Buddhism has managed to not only revive but also flourish in exile by the grace of His Holiness the Dalai Lama. Deng Xiaoping has been known to have said that there is a growing attention paid towards Tibetan Buddhism all over the world. Thus, 1980s the policy towards religion freedom and its exercises inside Tibetan became relatively relaxed and various revival of Tibetan monasteries and enrollment of monks and nuns were carried out. However, in 2000, it was once again relegated to highly imposed scrutiny and restrictions that even the display of the portrait of His Holiness the Dalai Lama is restricted. Religion of Tibet is operated solely as a means to their political ends by the Chinese government.’ 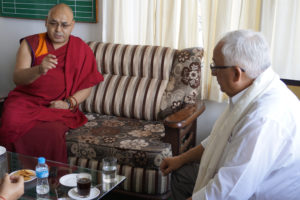 On the ecological aspect of the Tibetan environment, Speaker said, ‘Tibet is nowadays often called as the ‘their-pole of the world. Most of the countries in Asia has  their rivers originating from Tibet, which has become the source of their livelihood. With the incessant deforestation and innumerable constructional operations being carried out inside Tibet, further deteriorating Tibet’s ecosystem and its environment, Chinese government continues to blame its neighboring countries for emitting air pollution and negatively effecting the ecology of Tibet.’

‘The scholars and researchers on the economical growth of China has pointed out that it could fall down by 20 years times in the future as India rises in its economical stature. A lot of countries comply with China for economical and financial reasons and if such circumstances continues, the growth of China is assured as well in the future,’ opined the Tibetan Speaker while discussing on the unprecedented growth of China’s economy and its growing power.

Thereafter, Australian Mp Michal David Danby expressed his experience on his visit to the Tibetan Children’s Village earlier that morning and said that it was overwhelmed him to see the young Tibetans who were born in exile, with a very strong sense of their own cultural awareness and language capabilities.’

He was later taken for a quick guided-tour to the Tibetan Parliamentary hall.

The next day on April 28,2018, they had a working dinner along with members of the Standing Committee of the 16th Tibetan Parliament-in-Exile at Hotel Tibet, McLeod Ganj. They actively discussed on the various economical aspects of the world and their influences.

Expressing his gratitude for his support to the cause of Tibet on bahlf of the 16th Tibetan Parliament-in-Exile and Tibetans, Speaker presented the Australian MP Micheal David Danby with a traditional Tibetan scarf and a small token of memento. 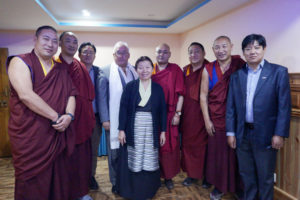 Micheal David Danby with the members of the Standing Committee of the 16th Tibetan Parliament-in-Exile. (28.04.18/P.C:TPiE)