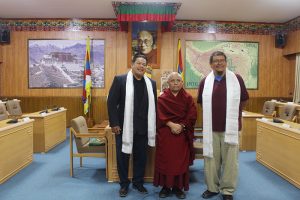 The Deputy Speaker Acharya Yeshi Phuntsok received them in his office and briefed on the destruction of Tibetan religion, culture, and language by the Chinese government in Tibet.

He then spoke on the preservation of Tibetan language, culture, and religion by the exiled Tibetans with the blessing and farsighted vision of His Holiness the 14th Dalai Lama. Tibetans in exile have established Tibetan schools, monasteries, institutes, libraries, etc. to protect and preserve the unique culture, language, and religion.

The Deputy Speaker further explained the Middle Way Policy of Central Tibetan Administration, current the critical situation inside Tibet, and about the recommendations submitted during the eighth round of dialogue between the envoys of His Holiness the Dalai Lama and China.

Thereafter, he spoke the composition and functioning of Tibetan Parliament-in-Exile, and specifically of the Standing Committee Members.

Following that he explained the visitation program of Tibetan Parliamentarians to different countries to meet officials, think tanks, and lawmakers to garner support for the cause of Tibet.

He also spoke about the declaration and action plan adopted by the 7th World Parliamentarians’ Convention on Tibet held from 7-10 May 2019.

Mr. Raymond and Mr. William also shared their experiences from attending the 59th Anniversary celebration of Tibetan Children’s Village and the similarities between the culture of Tibetans and of theirs. They also suggested collaborating Tibetan schools with the Indian schools that can prove to be very beneficial.

They expressed their happiness on learning many things from Deputy Speaker on Tibet issue and assured their full support to Tibet issue in the future.

Finally, they visited the Parliament hall. 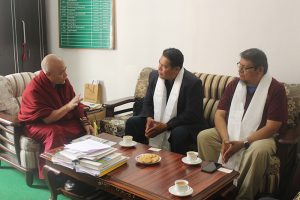 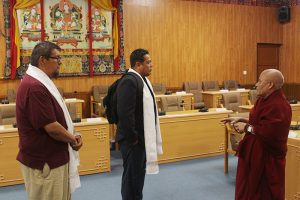