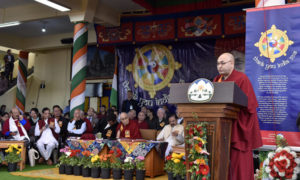 On 10th April, 1959, the late Prime Minister of India, Pandit Jawaharlal Nehru wrote to His Holiness the Dalai Lama, ‘My colleagues and I welcome you and send you greetings on your safe arrival in India. We shall be happy to afford the necessary facilities for you, your family, and entourage to reside in India. The people of India who hold you in great veneration will no doubt accord their traditional respect to your personage.’ As evident in the autobiography of His Holiness the Dalai Lama, it is now 60 years since the generosity, respect and facilities proffered to His Holiness the Dalai Lama and the Tibetan people by the people and government of India. During that time, His Holiness the Dalai Lama resided at his temporary residence in Mussoorie and established various institutions, amongst which, schools for the Tibetan children were given special consideration. In April 1960, he left Mussoorie for Dharamsala, from wherein; His Holiness established various institutions and centres for the revival and preservation of Tibetan religion and culture. Moreover, separate offices were also established to carry forward the Tibetan Freedom Struggle.

As Tibet passed through a most critical phase in its history, a Tibetan Government in Exile, representing all Tibetans, both inside and outside Tibet was formally established.  On 2nd September 1960, the first ‘ Commission of Tibetan Peoples’ Deputies’ took the oath of office in the presence of His Holiness the Dalai Lama, thus formally inaugurating the Tibetan democratic system of governance and steadily following the footsteps of other democratic nations of the world. With extensive consideration to both immediate and long term goals, reforms were introduced while imbibing the traditional values and virtuous customs into the new system.

Subsequently, His Holiness the Dalai Lama promulgated the Constitution for future Tibet’s polity, consisting of 190 chapters and 77 articles. On 28th June, 1991, His Holiness the Dalai Lama duly approved the Charter adopted by the 11thAssembly of Tibetan People’s Deputies, thus, establishing the Tibetan Administration in exile with firm foundation within the jurisprudence of modern democratic system. Later, Tibetan Supreme Justice Commission in exile as well as three autonomous bodies were founded. In year 2011, when His Holiness devolved His political and administrative authority to the democratically elected Tibetan leaders, it was in fact an inconceivable yet a glorious deed for the immediate and future interests of Tibet and its people.

On one side the armed aggression and the forced invasion of Tibet by the government of China is devastating. Yet on other hand, the spirit of His Holiness the Dalai Lama, the establishment of schools for the Tibetan children by the generosity of the people and the government of India and rehabilitation of Tibetan people in various settlements to strive together has but strengthened and augmented the unity of Tibetans from the traditional three provinces like never before. By establishing monasteries and nunneries to study and learn about Tibet’s unique and distinguished religion and culture, along with contemporary education for the religious practitioners such as monks and nuns, His Holiness has striven hard to bring about communal integrity and harmony within the various sects of Tibetan Buddhism. And determining the situation of Tibetan refugees as unique within the diaspora of various exiled communities in the world, hitherto.

With great reverence and conviction rendered towards His Holiness the Dalai Lama internationally, whenever He toured the various educational centers and institutes all over this globe, His Holiness has tirelessly advocated oneness of humanity, religious harmony, conflict resolution through dialogue, inner development along with external materialist development as well as harboring a universal responsibility towards this common world with common humanitarian heritage and the protection of its environment for the sake of creating a peaceful century. And the exceptional contributions of His Holiness the Dalai Lama is not only recognized but also fortified by the conferment of over 152 prestigious awards including Nobel Peace Prize, US Congressional Gold Medal and John Templeton Award.

It is by the sole grace of His Holiness the Dalai Lama that the Tibetan nationality, its religion and culture, language can be distinctly recognized, with not just Tibetans but also the international support and special attention being paid to the Tibet’s struggle movement.  Boundless facilitation provided by the people and the government of India is in particular related to this aspect.

Historically Tibet and India have shared thousands years of cultural heritage, ancient knowledge and harmonious co-existence.  The two neighbors are known as the flourishing wellspring of ancient wisdom and thought.  It is therefore, unforgettable for the Tibetans that when they faced the greatest crisis in their history, the people and Government of India came forward to offer the greatest support for them. The Tibetan people honor with love and respect, our Indian brothers and sisters as a family. The overwhelming support, friendship and hospitality extended by the Government and People of India for the Tibetan people in the darkest time of our history cannot be ever be forgotten. His Holiness the Dalai Lama has, on multiple occasions, hailed the relationship between India and Tibet as one of Guru and Chela. Former Indian Prime Minster, Honorable Morarji Desai have described ‘India and Tibet as branches of the same Bodhi tree.’

It is now nearing 60 years since Tibetans have come into exile and have made Dharamsala, the northern part of Himachal state in India, the residence of His Holiness the Dalai Lama and the nexus of the Central Tibetan Administration. Many Tibetan settlements, schools, Tibetan medical clinics and allopathic hospitals have been set up in various states of India. The possibility of preserving and sustaining the Tibetan nationality, its unique religion and culture during the critical period of Tibet’s history is due to the support and generosity of the people and the government of India. Recognizing this gratefulness, on behalf of every Tibetans I wish to convey my heartfelt gratitude to the people and government of India.

I also wish to express my gratitude to all the people and government, who has rendered their support and assistance in the growth and promotion of Tibetan cause, its religion and culture and administration, directly or indirectly.

In conclusion, May His Holiness the Dalai Lama live for aeons and may all his wishes be fulfilled with spontaneity. May the just cause of the Tibetan people resolve and may the auspicious day of reunification of all Tibetans in Tibet arise in all speediness!

Disclaimer : In case of any unintended discrepancy between the this translation and its original Tibetan text, the latter should be treated as authoritative and final.