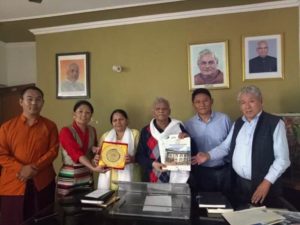 The delegation with Sh. Rattan Lal Kataria, Member of the Lok Sabha and his wife Smt. Bhanto Kataria, Vice President of BJP Haryana and Director of Gas Authority of India Ltd (GAIL) on Oct 9.

Chandigarh: In continuation with the Tibetan parliamentary delegation successful conclusion of Dehradun visit to call upon the Governor, Chief Minister, Speaker and members of State Legislative Assemblies, the four-member delegation of the 16th Tibetan Parliament-in-Exile, namely, Parliamentarians  Mr. Dawa Tsering, Ven. Khenpo Jamphal Tenzin, Mrs. Samten Chodon and Mr. Tashi Dhondup, has now continued their program in the states of Punjab and Haryana from Oct 7. 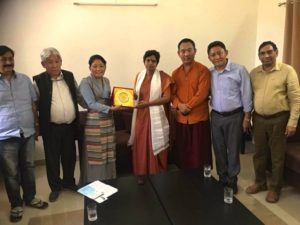 The delgation with Smt. Latika Sharma, MLA and Vice President of Women Cell on Oct 8. 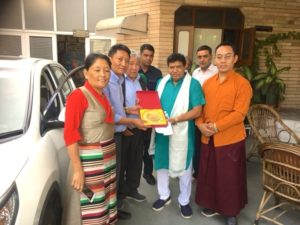 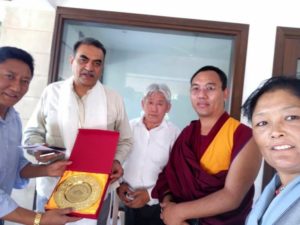 The delegation upon meeting with the personages in the states of Chandigarh and Haryana expressed their gratitude to the concerned dignitaries, people and the government of India on behalf of all the Tibetans and Tibetan Parliament-in-exile. They briefed them on the endeavors of His Holiness the Dalai Lama and the composition and the functions of Tibetan Parliament-in-exile. They also elucidated on the historical relationship and the tradition shared between Tibet and India, with India being the land of holy Buddhist pilgrimage while stressing on the significance of sustaining the symbolic Guru-Chela relationship between the two and raising awareness about it among the youths. 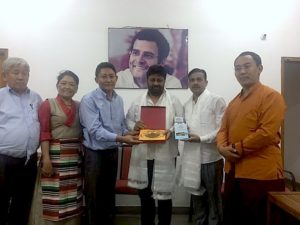 They also supplicated the respective personages to initiate discussion on Tibet whenever bilateral meetings are held between the government of India and China and to render their support to the cause and issues of Tibet. They highlighted on the 152 self-immolations carried out by Tibetan inside Tibet in protest against the brutal policies, which is aimed at obliteration of Tibetan culture and language, by the Chinese government. While apprising them on the inculcation of ancient Indian tradition and culture by the Tibetans, the delegation expressed the indebtedness and gratitude felt by every Tibetans to the people and government of India.

The respective dignitaries were presented with Tibetan Parliamentary Secretariat’s souvenir and the five-point appeal letter as they extended the invitation to visit Dharamsala, which is the seat of exile Tibetan administration. 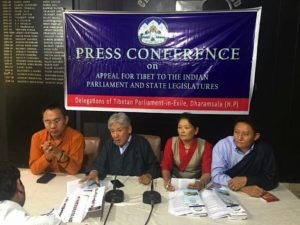 The delegation raising awareness on the issues of Tibet during the press conference held on Oct 9 at Chandigarh.

At 12 in the noon, a press conference was converged to raise awareness on the ongoing Tibet advocacy campaign and answered the questions raised by the journalist present there. Around thirteen different media attended the conference.