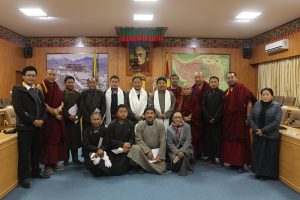 Deputy Speaker Acharya Yeshi Phuntsok welcomed by expressing his warm greetings to all the Councilors and introduced each member of the Standing Committee of the 16th Tibetan Parliament-in-Exile. 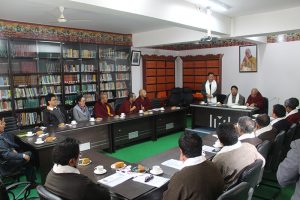 Followed by Speaker Pema Jungney’s address, where he started with elucidating on the evolution of Tibetan democratic polity that was bestowed by His Holiness the Dalai Lama to the Tibetan people. During a long life prayer offering to His Holiness the Dalai Lama in 1960 by the people of three provinces of Tibet and of different religious sects, Tibetans vowed to stay united and strong as an iron globular mass under the leadership of His Holiness the Dalai Lama. His Holiness at that time advised Tibetans to elect 3 representatives each from the three provinces and 1 representative each from the four Buddhist religious Schools So, 13 elected Parliamentarians then called Deputies took their oath and the first Tibetan Parliament-in-Exile, then called Assembly of Tibetan People’s Deputies was established on 2nd of September 1960. Since then Tibetan people across the world celebrate this day as a democracy day. 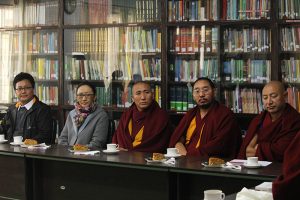 From increasing number of Deputies to allotting separate reservation for women in the Parliament, Speaker explained changes in the composition of Tibetan Parliament-in-Exile in detail. Until 1990 Ministers (Kalons) were directly appointed by His Holiness the Dalai Lama, which changed from 2001, when Kalon Tripa now known as Sikyong, started getting directly elected by people. In 2011, His Holiness the Dalai Lama devolved his political power and handed over to Sikyong, who is directly elected by the Tibetan people across the world.

Speaker further explained composition of the current 16th Tibetan Parliament-in-Exile and features of exiled Tibetan democratic system that is unicameral or partyless system, where candidates for Sikyong and Parliamentarians are elected directly by people, unlike other democratic system with political parties, where the candidates are chosen by their respective political parties. Similarly, Speaker spoke about the Parliamentary Sessions which are held twice a year as per the instruction of Charter of Tibetans in exile and about the Standing Committee’s meeting which are held twice a week. 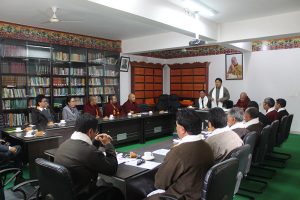 After that Shri Gyal P Wangyal, the Chief Councilor of Ladakh Development Hill Council in his address explained functioning of Ladakh Autonomous Hill Council that was established in 1995 after numerous appeals to the center government. Currently the Ladakh Autonomous Hill Council has 30 Councilors , out of which 26 are from BJP, Congress, and Jammu and Kashmir National Conference (JKNC) and are elected  and 4 Councilors are directly appointed from the center government. Since, Ladakh has become a Union Territory (UT), Ladakh Autonomous Hill Council takes all the responsibilities. The Chief Councilor also expressed their wish to learn from Central Tibetan Administration (CTA), as all the projects on the development of Ladakh and preservation of its distinct culture falls under the Hill Council. He then spoke about their meeting with Sikyong and Cabinet Members, and then their meeting with the Speaker, Deputy Speaker, and members of the Standing Committee that day, and their following visit to various departments of the CTA. Finally, he concluded by assuring their continued support to the Tibetans residing in Ladakh. 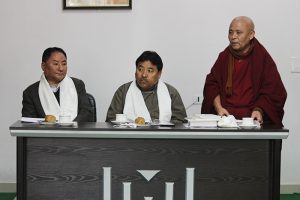 Thereafter, Deputy Speaker Acharya Yeshi Phuntsok in his address congratulated the Councilors for Ladakh on becoming a Union Territory and outlined the differences between the agendas discussed in Tibetan Parliament and Ladakh Autonomous Hill Council or Indian Parliament. In Ladakh Autonomous Hill Council or Indian Parliament, discussions are held on area’s economy or country’s economy, foreign affairs, protection of citizen, etc. whereas in Tibetan Parliament, discussions are held on keeping up the Tibetan struggle, advocate Tibet on international platforms, etc. Deputy Speaker further spoke about the sources of budget of the Central Tibetan Administration (CTA), which are Tibetan voluntary contribution, foreign aids, and others, which are subsequently sanctioned for education, health, public welfare, and politics through Budget Session of the Tibetan Parliament-in-Exile.

Deputy Speaker then informed the situation inside Tibet, where Tibetans are resisting against the repressive policies of Communist Party of China. Starting from 2009, 154 Tibetans, ages ranging from 15 years youth to 64 years old, have self-immolated to protest the Communist Party’s policies. Chinese government has turned Tibet into a war zone making it equally dangerous and risky for neighboring countries.

Following that Deputy Speaker thanked Ladakh and its people for their support to the Tibet’s issue until now. Initially when Tibetan refugees arrived at Ladakh, Bakula Rinpoche many other political and administrative persons supported Tibetans during those hard times. Similarly, former Parliamentarian Thupten Tsewang, MP Jamyang Tsering Namgyal, and many others are still supporting Tibetans in their capacities.

Until now, seven ‘World Parliamentarians’ Convention on Tibet (WPCT)’ were held and Deputy Speaker explained documents related to the WPCTs. At the same time, he urged them to go through the documents and provide more support for Tibet’s issue.

At last Deputy Speaker wished for success in every initiative undertaken by Ladakh as a Union Territory as per the Article 239 of the Constitution of India and expressed happiness in receiving and meeting the Chief Executive Councilor, Deputy Chairman, and other Executive Councilor to the Tibetan Parliament-in-Exile.

Finally, they visited Parliament hall along with Speaker, Deputy Speaker, and members of Standing Committee of the 16th Tibetan Parliament-in-Exile.