Day 3 and 4 of the Fourth session of Tibetan Parliament 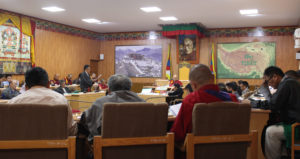 Dharamsala: The third day of the session commenced with the continuation of the Day 2’s program of debate on the 2016-17 Report of Department of Home.

This session, in particular, saw an adjournment from 1:30 pm till 3:15 pm in the evening, which resumed again to continue with the session. 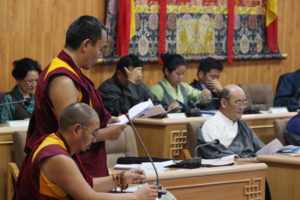 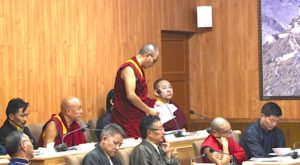 Parliamentarian Ven. Lopon Thupten Gyaltsen in support of the motion.

The fourth day session began with Parliamentarian Ven. Khenpo Jamphel Tenzin, supported by Parliamentarian Ven. Lopon Thupten Gyaltsen, presented the motion for the implementation of Tibetan language as primary medium in every official program and correspondence,  be it at the Central or at settlement level. With an active discussion, this motion was passed as a resolution with a majority consensus.

Thereafter, with procedural leave of motion sought and unopposed, the session saw introductions of numerous bills for the amendment in the existing Rules and Regulations by the Cabinet. 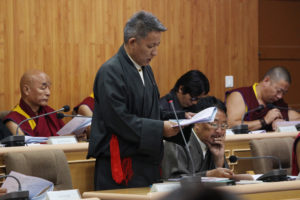 Home Kalon Mr. Sonam Topgyal Khorlatsang tabled the bill to amend the Clause 2 of Article 12 in the Allotment of Staff Quarters and Residential Quarters for Retired Staffs Rules and Regulations, which was supported by Education Kalon Mr. Ngodup Tsering. 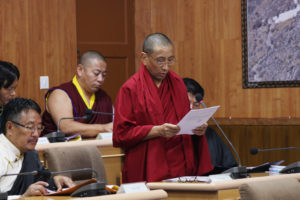 Religion and Cultural Kalon Ven. Karma Gelek Yuthok tabled the bill to amend Article 4, clause 1 of Article 5, clause 1 and 11 of Article 6 in the Rules and Regulations for the Presentation of Excellency Award to the Outstanding Staffs of Central Tibetan Administration, supported by Finance Kalon Karma Yeshi. 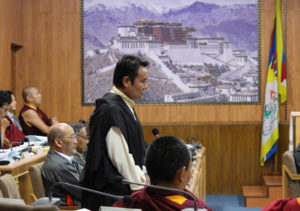 Health Kalon Mr. Choechung Wangchuk tabled the bill to amend Article 1 in the Statute of the Tibetan Medical Association, which was supported by Security Kalon Mr. Phagpa Tsering Lhabrang.

The respective bills tabled by the Cabinet for amendment passed the First Reading today. 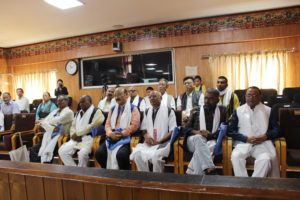 Conveners of the Indo-Tibet Friendship Association at the Tibetan Parliamentary session.

Deputy Speaker, Ven. Acharya Yeshi Phuntsok welcomed them and thanked them for the various campaigns on Tibet’s issue undertaken by them at their local level even though this visit has been their first here. He spoke to them on the various campaigns undertaken by the Tibetan Parliament at local and international level referring to the recent Parliamentary delegation to Russia and Japan. He appealed the members to consolidate the Indo-Tibetan Friendship Association further by associating with various local residents. The members also offered their valuable suggestions and directions.

Their visit to the Tibetan Parliament was welcomed at session by the Speaker during the session. 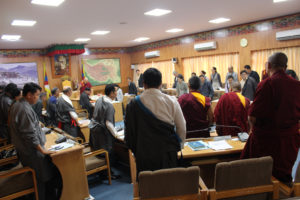 Conveners of Indo-Tibet Friendship Association being welcomed at the session.