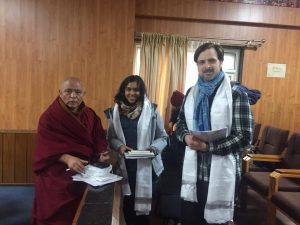 Dharamsala: 15 students and 2 Professors from Denver University, USA, who have come for cultural exchange program from 9-24 December, 2019, visited Tibetan Parliament-in-Exile earlier today. After exchanging brief introduction of Tibetan-Parliament-Exile and the cultural exchange program organised by Tibet World by the respective staff, Deputy Speaker Acharya Yeshi Phuntsok, while interacting with the students and Professors shared his experiences of being a teacher from 1991-1996 and his concept of convincing rather than imposing ideas on students or any audience.

Deputy Speaker further spoke about Tibetan democratic system bestowed by His Holiness the 14th Dalai Lama and its evolution starting from 1960s. He then explained differences in the agendas discussed in Tibetan Parliament and other Parliaments, even though the procedures are almost same. In Tibetan Parliament, Members of Parliament discuss on sustaining, and outreaching Tibet’s issue, and on preserving Tibetans’ distinct language, culture, and religion, while in other Parliaments for example in the US, Members of the Parliament discuss on Liberal or Conservative economy policies, taxation, labour law, etc.

Thereafter, Deputy Speaker spoke briefly about the resolutions passed in Tibetan Parliament, functioning of Office of Tibet across the world, and about transparency and accountability of the Central Tibetan Administration.

Speaking of Chinese government and its numerous failed policies on Tibet because of the nonviolent resistance and courage of Tibetans inside Tibet, Deputy Speaker spoke about the self-immolations happening inside of Tibet to protest the repressive regime of Communist Party of China. He then spoke about the current situation of Tibet, which has turned Tibet into a war-zone, effecting even the neighbouring countries.

Finally, Deputy Speaker presented publications from Tibetan Parliament-in-Exile to the two professors and advised students to go through Tibet’s history, which is the best way to learn Tibetan struggle, and advised them to support the just cause of Tibet by knowing the truth in near future.

The students are here for cultural exchange program from 9-24 December, 2019. 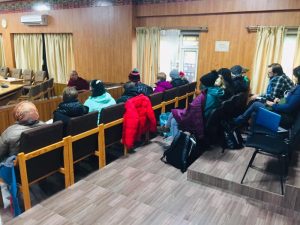