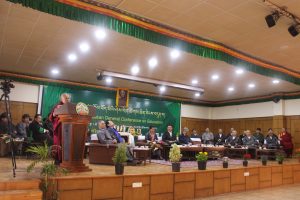 He also conveyed a recent proclamation of His Holiness the Dalai Lama from Chotrul Monlam Chenmo about his appreciation towards the former public servants and advice for the present public servants of Central Tibetan Administration to strive for the bigger cause of Tibet.

He remembered Tibetan scholars inside Tibet like 10th Panchen Lama, Dhunkar Lobsang Thinley,Tseten Shabdung, Mugey Samten , Khenrab Woeser and Khentse Tsenam Rinpoche, who risked their life and fought against the harsh Chinese regime to save and protect Tibetan culture.

At the same time, suggested the attendees of the conference to discuss freely and emphasized on implementing the agendas after the conference.

He explained article 17 of chapter 3 from Charter of Tibetans-in-Exile regarding education and assured full support from Tibetan Parliament-in-Exile concerning education of Tibetan children. Finally, Deputy Speaker advised the attendees to spend maximum time of the conference on discussion. 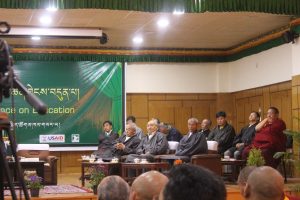