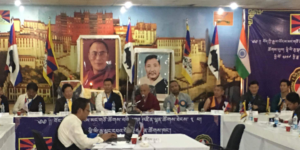 At the 5th Working Committee Meeting of the National Democratic Party of Tibet, Delhi.

Dharamsala: Deputy Speaker of the Tibetan Parliament-in-Exile, Ven. Acharya Yeshi Phuntsok attended the 5th Working Committee Meeting of the National Democratic Party of Tibet as per invitation extended by the same as it’s ‘chief guest’ and met with various Indian ministers from Sept 9 to 12 Sept and thereby concluded the official visit to Delhi on a successful note.

On Sept 9, the Deputy Speaker met with the long-time supporter of Tibet’s cause, Swami Agnivesh, former minister of Haryana government, Gerald Daly, Resident Coordinator of the United Nation in Bhutan, Mithilesh Prasad, Janata Dal United and Sanjay Kumar, President of Yuva Janta Dal (United) and apprised them on the political situations of Tibet. He also met with Sharad Yadav, former minister and member of Rajya Sabha and presented him with books published by of Tibetan Parliament-in-Exile.

He attended the 5th Working Committee Meeting of the National Democratic Party of Tibet the next day and stated, ‘This political party was founded on September 2, 1994 under the blessed advise of His Holiness the 14th Dalai Lama on the establishment of political parties during the meeting of Tibetan Youth Congress in 1990. Furthermore, ever since it’s establishment, the party has engaged in admirable activities by creating awareness about Democracy amongst the Tibetan community and contributed significantly to the cause of Tibet as well as in fulfilling the duties of societal obligations.

He further elucidated on the evolution of Tibetan Democracy in exile stating, ‘Following His Holiness the Dalai Lama’s advice in Feb 1960 to set up an elected body of administration comprising representative from the three traditional Tibetan provinces and respective Tibetan schools of religion, on Sept 2, the representative duly elected took their oath as the first parliamentarian. On that historic day, ‘Democracy’ was established. The successive evolution and transformation in the exile Tibetan democracy is but solely by the grace of His Holiness the 14th Dalai Lama.’

He also explained in detail the amendments in the evolution of democracy brought about by the respective parliamentarians tenural and added that the success and the continuation of the party depends on the fulfillment of the responsibility by the members with steadfast perseverance and tranquility. 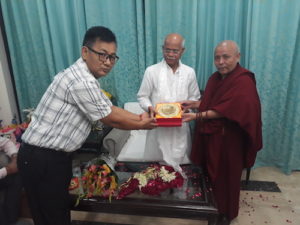 with Shiv Pratap Shukla, Minister of State of Finance

He also met with Dr.N.K.Trika, former Director of Press Council of India and the former National Convener of the Core Group for Tibetan Cause, who is recuperating from an illness, to thank him for his constant support to the Tibet’s cause. Despite his recuperating state, Dr. Trika showed his unwavering support by offering his suggestions and guidance for the cause of Tibet. 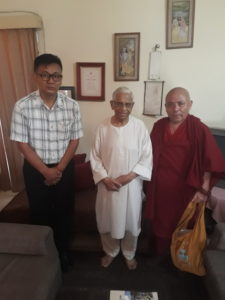 with Dr.N.K.Trika, former Director of Press Council of India and the former National Convener of the Core Group for Tibetan Cause.

This visit eventually wrapped with the Deputy Speaker meeting Ashwini Kumar Choubey, Minister of State of Health and Family Planning and Arun Srivastav, Secretary of Janata Dal United on Sept 12.

He left for Dharamsala the same day. 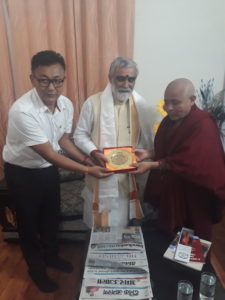 with Ashwini Kumar Choubey, Minister of State of Health and Family Planning