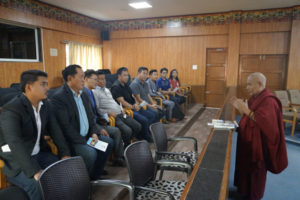 ‘Nowadays we receive a lot of both official guests and visitors interested in the Tibet’s issue to the Tibetan parliamentary house. And I appreciate your visit here as well. Since you all are leaders and front-runners in the community, it is imperative to have thorough and in-depth awareness on the situations of our struggle movement. It is the responsibility of both the Central Tibetan Administration and every associations to cultivate as many as supporters for the principle cause of Tibet. Therefore, if you could garner support for Tibet’s cause from the members of Indian parliament ad state legislatures, authorities, locals and youths, it would lend positive effect on the potency of the Tibetan’s struggle movement, cooperatively with the Central Tibetan Administration,’ said Deputy Speaker Ven. Acharya Yeshi Phunstok.

He also briefed them on the amendments of the rules and regulations during the parliamentary session, budget proposal as well as on the various discourse debated on the principle issues of Tibet.

The members were also briefed on the various publications of Tibetan Parliament such as ‘Tibetan Parliament-in-Exile – An Introduction and Insight’, books and pamphlets on self-immolation etc.

Thereafter, they had a brief meeting with Speaker Khenpo Sonam Tenphel. 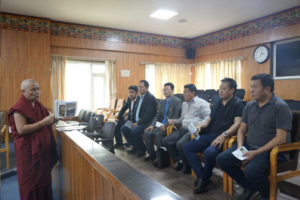