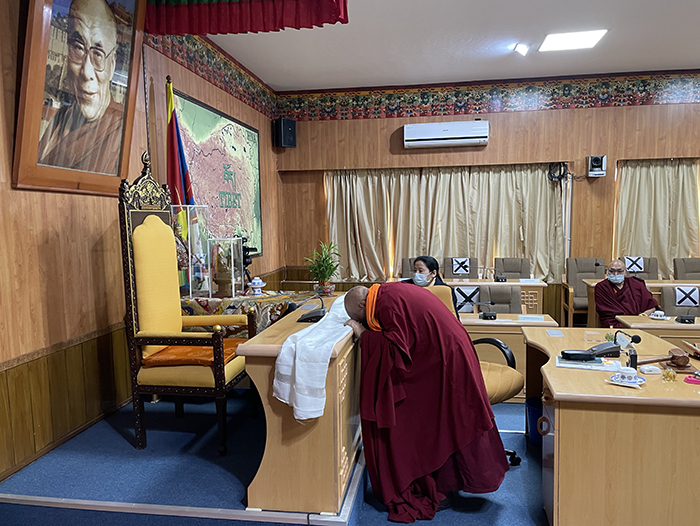 Deputy Speaker Acharya Yeshi Phuntsok offering Khatak to the portrait of His Holiness the Dalai Lama during the administration of the oath of office to the new Parliament members Ven. Geshe Gangri of Domey province and Mr. Namgyal Qusar of U-Tsang province for the 16th Tibetan Parliament-in-Exile

Dharamsala: In accordance with the Article 57, clause (I) (II) and the Article 47 of the Charter of Tibetans-in-Exile, Deputy Speaker Acharya Yeshi Phuntsok administered the oath of office to the new Parliament members Ven. Geshe Gangri of Domey province and Mr. Namgyal Qusar of U-Tsang province for the 16th Tibetan Parliament-in-Exile.

Following the resignation of the former Speaker Mr. Pema Jungney and former Parliamentarian Mr Lobsang Choejor of the 16th Tibetan Parliament-in-Exile, the replacement of the Parliamentarians was made from a reserve waiting list maintained by the Central Tibetan Election Commission for the concerned constituency on the basis of the required minimum number of votes won by the candidates who did not make it to the Parliament during the last general election and who had the highest number of votes among those in the existing reserve list. 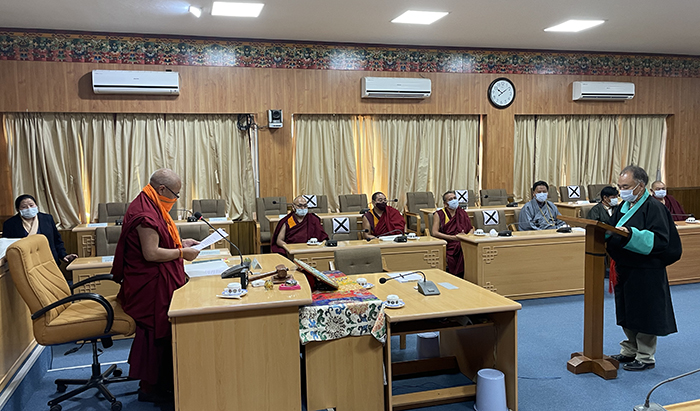 The swearing-in ceremony for the two Members of the Parliament was held, in the presence of the standing committee members of the 16th Tibetan Parliament-in-Exile and Parliamentary staff members, at 10: 00 am at the Parliament here today. The ceremony started with offering of Tibetan traditional scarfs to the portrait of His Holiness the Dalai Lama, followed by oath administration of the two new Parliament Members, and serving of dresil (sweet rice) and butter tea. On the auspicious day of Lhakar (White Wednesday), the Deputy Speaker in his address congratulated the newly sworn-in Parliamentarians on behalf of all the Standing Committee members and all the Tibetans. He expressed his wish to work with them for the remaining term of the 16th Tibetan Parliament-in-Exile. “Even though the term of this Parliament is soon to be over, it is an opportunity for all to work for the best of our cause and conclude the 16th TPiE in great terms, which would be the best offering to His Holiness the Dalai Lama,” said the Deputy Speaker.

The brief ceremony then proceeded with presentation of Tibetan traditional scarf to congratulate the new MPs by the Standing Committee members. Parliamentarians Geshe Gangri and Mr. Namgyal Qusar sought  guidance from the Deputy Speaker and were handed over the official documents at the Deputy Speaker’s chamber. 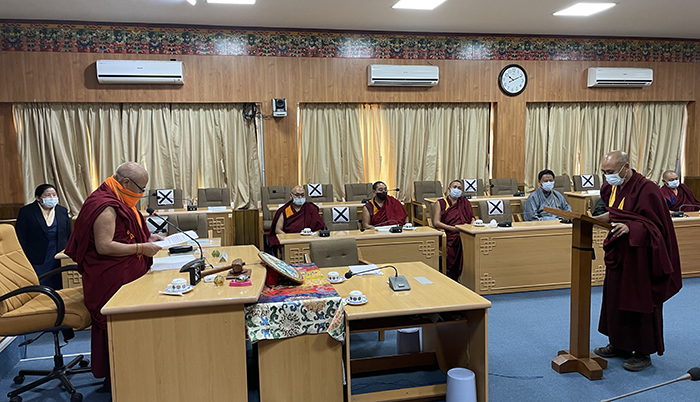 Parliamentarian Ven. Geshe Gangri  was born on 22nd October 1982 in Ngaba region of Tibet. Since 2005, Geshe Gangri has served the Tibetan cause in numerous capacities, shouldering  responsibility of  Chairperson, Vice Chairperson, and Secretaries of many Tibetan NGOs and member of Tibetan Local Assembly of Mundgod. In order to spread awareness of Tibet’s issue,  Geshe Gangri partook in an all India cycle rally and march in 2009. In 2011, he was honoured with the Geshe Degree (equivalent to Ph.D.) from Drepung Monastery.

In 2010, Geshe Gangri took responsibility as the editor and distributor for a newspaper entitled, ‘Tibetan Parliamentarian’ during the election of Sikyong and Parliamentarians.  Likewise, he has published numerous research articles on newspapers, magazines, internet, etc.

Parliamentarian Namgyal Qusar (Menrampa) was born on 2nd October 1960. He is a Medical practitioner of Tibetan traditional Medicine. After completing his schooling from the Central School for Tibetan (CST), he graduated from Men-Tsee-Khang Institute Dharamsala in 1987 with Kachupa Degree (equivalent to MBBS) and then with Menrampa Degree (equivalent to MD) in 1997. He started his career as a Researcher at the Research and Development Department of Men-Tsee-Khang in 1987 and later held the post of Deputy Director of Research & Development Department, Men-Tsee-khang until 1999.

During his work in Men-Tsee-khang, he pioneered in the development of several Sorig Health Products for Men-Tsee-Khang and designed several Tibetan medicine clinical research projects. He was also the editor of Men-Tsee-Khang’s journal and wrote a handbook on food and exercise on the basis of Sowa Rigpa in French language. Likewise, under the CTA Health Department’s project, he has worked on translating the books entitled, ‘Where there is no Doctor’ and ‘Handbook of Mental Health’ from English to Tibetan language.

He has been a visiting professor of Tibetan medicine at Norbulingka Institute of Higher Tibetan Studies, Dharamsala since 2001 and the Founding Director of Qusar Tibetan Healing Centre, Dharamsala (H.P.) From 2004-2006, he worked as a  general secretary of the Central Council of Tibetan Medicine, Dharamsala and from 2008-2010, Mr. Qusar has collaborated with the Tubingen University Hospital of Germany in treating 524 cardiac patients with the comparison of Traditional Tibetan Medicine and Western diet that later was published and praised in International Journal of Cardiology in 2013.

He has travelled to more than 19 countries for Seminars, Workshops and Conferences. He is also one of the key resource persons on Tibetan Medicine Training and Courses to Tibetan Medicine Physicians and currently working on new Tibetan medicine clinical projects.

Mr Namgyal Qusar has done numerous social services and has received many awards and certificates for his outstanding contribution in the field of Tibetan medicine. 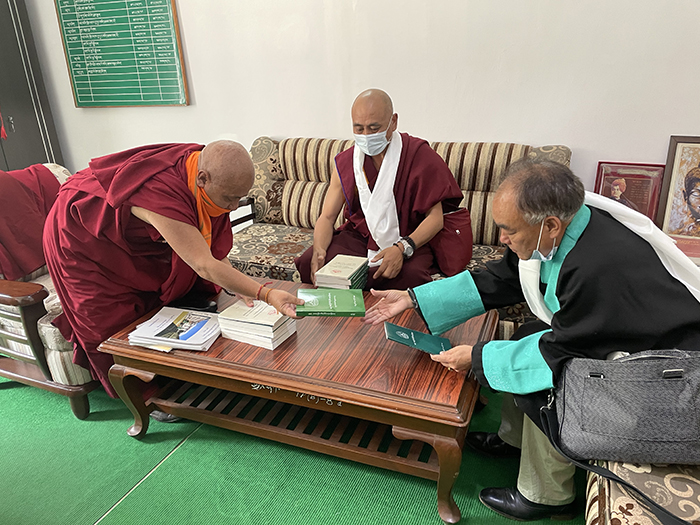 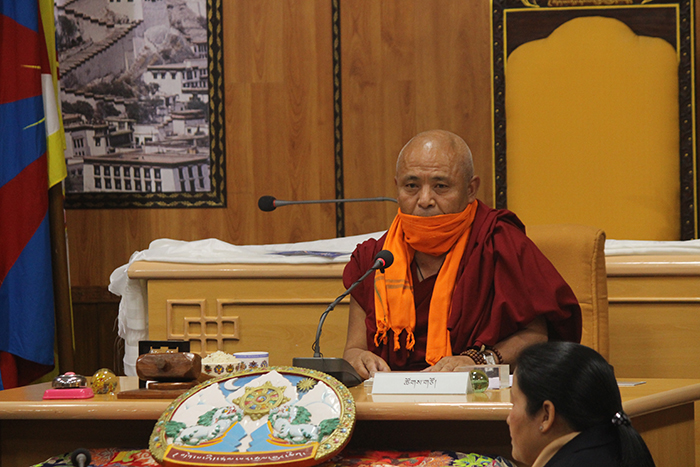 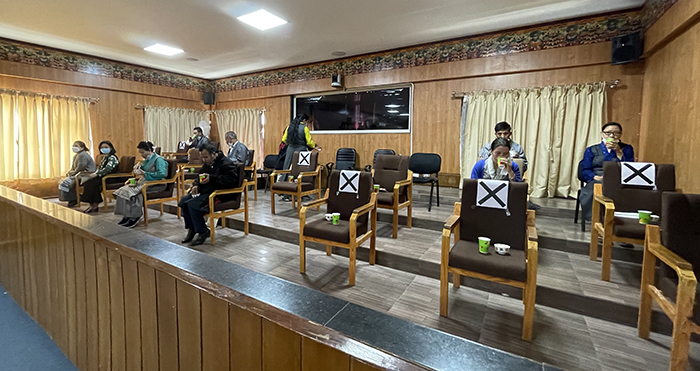 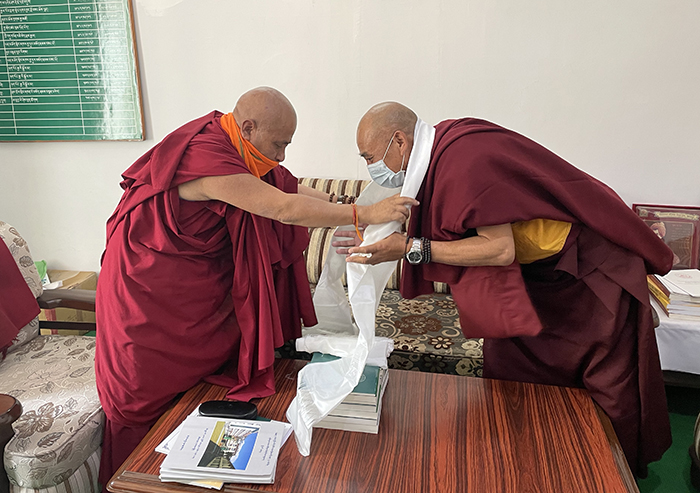 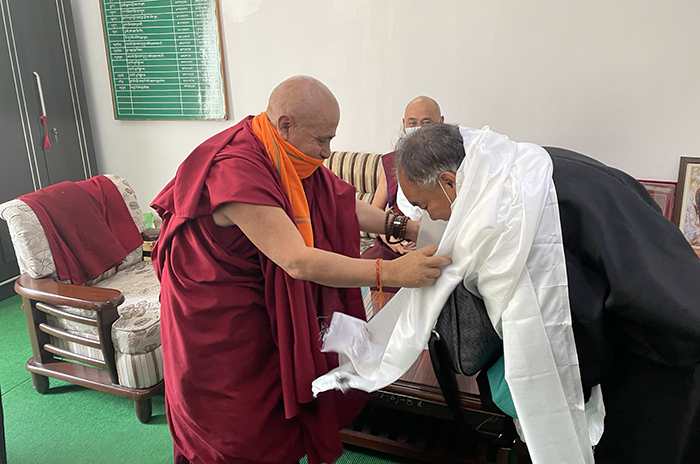 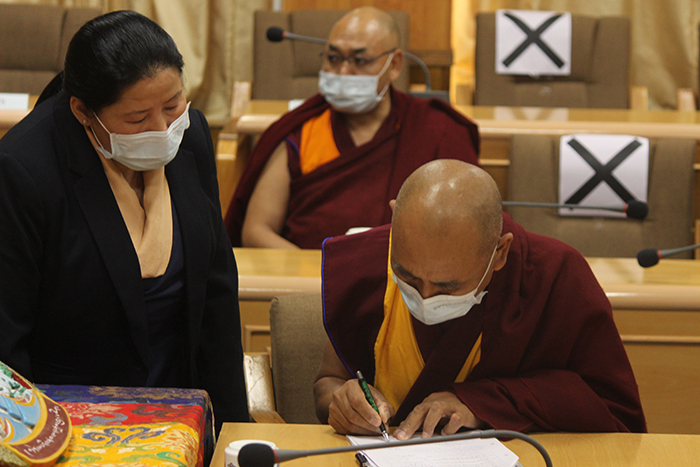