Parliamentarians in the presence of the Khenpos (abbots) of Gaden Shartse and Gaden Jangtse speaking to the gathering of monks.

Mundgod: Parliamentarians Khenpo Kada Ngedup Sonam and Tenzin Choezin of the 17th Tibetan Parliament-in-Exile have successfully concluded their official visit to Mundgod Tibetan Settlement from 17th  to 21st February 2022. During their visit to Mundgod, the MPs met with Tahsildar Sridhar Mungalmani and extended their appreciation and gratitude on behalf of the Tibetan Parliament-in-Exile and Tibetan people to the Government of India, especially to the office of Tahsildar for extending the much-needed assistance and help to the Tibetans of Mundgod. Requesting the Tahsildar to protect the land provided by the Indian government to the Tibetans, the Parliamentarians urged him to request the higher authorities to allocate Record of Tenancy Certificate (RTC) for the Tibetans who are yet to receive them. A local Newspaper clipping of the MPs meeting with Tahsildar Sridhar Mungalmani .

During their meeting with the Administrative Medical Officer of Taluka Hospital Mundgod Rtn. Dr. H. F. Ingle, the Parliamentarians extended their appreciation to the Taluka Hospital for providing health care facilities to the Tibetan residents, especially during the pandemic caused by the COVID-19. Likewise, they also met with the Circle Police Inspectors/Police Inspector Siddappa Shimani and extended their gratitude for providing security during His Holiness the Dalai Lama’s visit to Mundgod and for safeguarding the welfare of settlement dwellers.

Thereafter, they visited the office and shop of the Ex-Army Association (SFF) and lightened butter lamps in the memory of the Tibetan martyrs. Followed by visiting offices of the Local Tibetan Assembly, the Regional Tibetan Freedom Movement, the Tibetan Co-operative Office, the Shiwatso Library, the Regional Tibetan Youth Congress, and the Lhamo Tsokpa. During their visit to the previously mentioned office, the MPs were received and briefed on the functioning of their respective organizations. 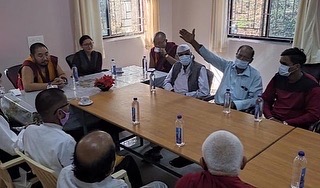 Meeting with the Tibet supporters.

They also met with Shri B.M Raikar, President Bharat Tibat Sahayog Manch, Shri K.C Thomas, Secretary of Indo Tibetan Friendship Society (Mundgod), Shri Mohan Das from Vishva Hindu Parishad, and other Tibet supporters discussing the issue of Tibet. They extended their gratitude to the Tibet supporters for their unwavering support and requested them to organize Tibet-related conferences to create awareness of Tibet. While the Tibet supporters lauded the work of the Mundgod Settlement Officer for the help and assistance provided to the local Indians during the pandemic which has helped in strengthening the friendship between the local Indians and Tibetans. They then visited the Dalai Lama iti school and met the teachers, staff, and students before calling the day off.

With the teachers and students of STS Mundgod.

On 18th February, the Parliamentarians in the presence of the residents of Settlement’s camp four gave public talks and answered questions asked by them. Parliamentarian Khenpo Kada Ngedup Sonam spoke on the great achievements of His Holiness the Dalai Lama, the current critical situation in Tibet, and on the agenda of the 17th Tibetan Parliament-in-Exile’s first session. While Parliamentarian Tenzin Choezin spoke on the international political status of Tibet. They then paid visits to Sambhota Tibetan School, Men-Tse-Khang, Old Age Home, Health Care Centre and Nunnery. They also attended a graduation ceremony of Tibetan students studying there and awarded certificates. They were then welcomed to the newly built Buddhist statues by the Drakyab Chungtsang Rinpoche and his father, followed visitation to Mundgod playground.

On 20th February, Parliamentarians Khenpo Kada Ngedup Sonam and Tenzin Choezin in the presence of the Khenpos (abbots) of Gaden Shartse and Gaden Jangtse spoke to the gathering of monks and then as well to the general public.

Heading towards Goa on the next day, they met with Superintendent of Police Dr. Suman D. Pennekar, IPS, and Deputy Commissioner Sri. Mullai Muhilan M P, I.A.S of Uttara Kannada District, Karnataka. The Parliamentarians are currently visiting Tibetans in Goa. 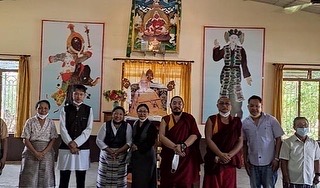 Parliamentarians lightening butter lamps in the memory of the Tibetan martyrs.

During a public talk in Mundgod.