The Parliamentarians accompanied by Samyeling Tibetan Settlement Officer Dorjee and ITCO staff Choney Tsering, on 10th February, paid a courtesy visit to Shri Kiren Rijiju, Hon’ble Union Minister for Law & Justice expressing their gratitude to him and to the government of India for consistently and genuinely supporting the Tibetan people in India. They further appealed to the government of India to take a stronger stand on Tibet against China. While TSO Dorjee apprised the hon’ble minister on the recent fire incident at Ambala Tibetan Sweater Market and requested his help in getting the necessary financial relief for the losses.

Later on the same day, the Parliamentarians met with Shri Sujeet Kumar, Hon’ble Rajya Sabha MP from Odisha, and APIPFT Convener offering their felicitations on his new role as the Convenor of APIPFT. The APIPFT Convenor shared his plans of engaging in Tibet-related events and campaigns in the near future. The day ended with an internal meeting with local community leaders of Samyeling Tibetan Settlement and Ladakh Bodh Vihar Tibetan Community.

On the next day, the Parliamentarians held a public meeting at Samyeling Tibetan Settlement where Parliamentarian Wangdue Dorjee spoke on the accomplishments of His Holiness the Dalai Lama and on the current critical situation of Tibet including the recent destruction of the 99-feet Buddha statue and 45 huge prayer wheels in Kham Drakgo. While Parliamentarian Youdon Aukatsang shed some light on the agenda of the first session of the 17th Tibetan Parliament-in-Exile and on international political status with regard to Tibet and spoke about their program of meeting Indian leaders. With China’s public image getting unfavorable globally due to the outbreak of COVID-19, she stressed the need of seizing the opportunity by putting the collective effort of all the Tibetans on the common cause of Tibet. The Parliamentarians reassured their strong commitment to serve the community and cause to the best of their capabilities.

Following that the Parliamentarians visited the Bureau Office in Delhi and met with Representative Ngodup Dongchung and staff members of the office. The MPs updated the Representative of their meeting with the Indian leaders and of the concerns shared by the Tibetan residents of Delhi.

Parliamentarians then paid a visit to Shri Jairam Ramesh, Hon’ble Rajya Sabha MP from Karnataka, and apprised him about the current situation inside Tibet.

On the same day, the Parliamentarians paid a visit to Dr. Shashi Tharoor, Hon’ble Lok Sabha MP from Thiruvananthapuram, Kerala. He paid his respects to His Holiness of the Dalai Lama and raised concerns about China’s meddling in reincarnation politics.

On the third day of their visitation, the 12th of February, the Tibetan MPs visited Tibetan winter sweater sellers of Gurgaon Sector-05 and Gurgaon Sector-51 to comprehend the challenges faced by them and to find ways to address them.  The Parliamentarians continued their visitation meeting Shri Amarendra Dhari Singh, Hon’ble MP Rajya Sabha from Bihar who had recently raised the issue of Tibet in the Indian Parliament. The members expressed their profound gratitude for raising the issue of Tibet and presented him with books in English and Hindi on the Tibet issue. They apprised him of the current situation inside Tibet and also invited him to join the All-Party Indian Parliamentary Forum on Tibet (APIPFT). Mr. Singh expressed his commitment to continue to raise the issue of Tibet in the Parliament. They also invited him to visit Dharamshala as a guest of the Tibetan Parliament in exile.  The meeting with Shri A. D. Singh was covered by media including ANI and Live Cities News.

The  Parliamentarians on the next day called upon Smt. Jaya Jaitly, an Indian politician and a former Samata Party President, an activist, author, and Indian handicrafts curator, who is a steadfast supporter of Tibet and has championed the Tibetan cause for many years.

Parliamentarians were invited to a lunch with Shri Amitabh Mathur, founding member of DeepStrat LLP a New Delhi-based Think Tank and Strategic Consultancy. Mr. Mathur has served over 32 years in various high-level posts including Special Secretary, RAW, and a diplomat in the Indian embassies in Beirut, Paris, Dhaka, and London. Post-retirement he was appointed by the government of Prime Minister Narendra Modi as a Special Adviser to the federal Ministry of Home Affairs and advised the government on Tibetan and Buddhist affairs in addition to several other portfolios. In this role, he forged a close relationship with the Central Tibetan Administration as well as with His Holiness the Dalai Lama and other religious leaders.  The Parliamentarians also took part in an interview program by NewsX, one of the leading Indian English News Channel, with some prominent Indian experts on the same day.

Finally, on the last leg of their visitation program, Parliamentarian Wangdue Dorjee met Tibetan sweater sellers of Sonipat and gave a public talk. He was briefed on the challenges of sweater sellers and their concerns. The visitation program successfully concluded with Parliamentarians meeting Indian leaders and with a comprehensive inquiry about the conditions of the Tibetans in Delhi-NCR chronicled by the parliamentarians that will be forwarded to the related departments of the Central Tibetan Administration through the Standing Committee of Tibetan Parliament-in-Exile for effective grievances redress.

with community leaders in Delhi 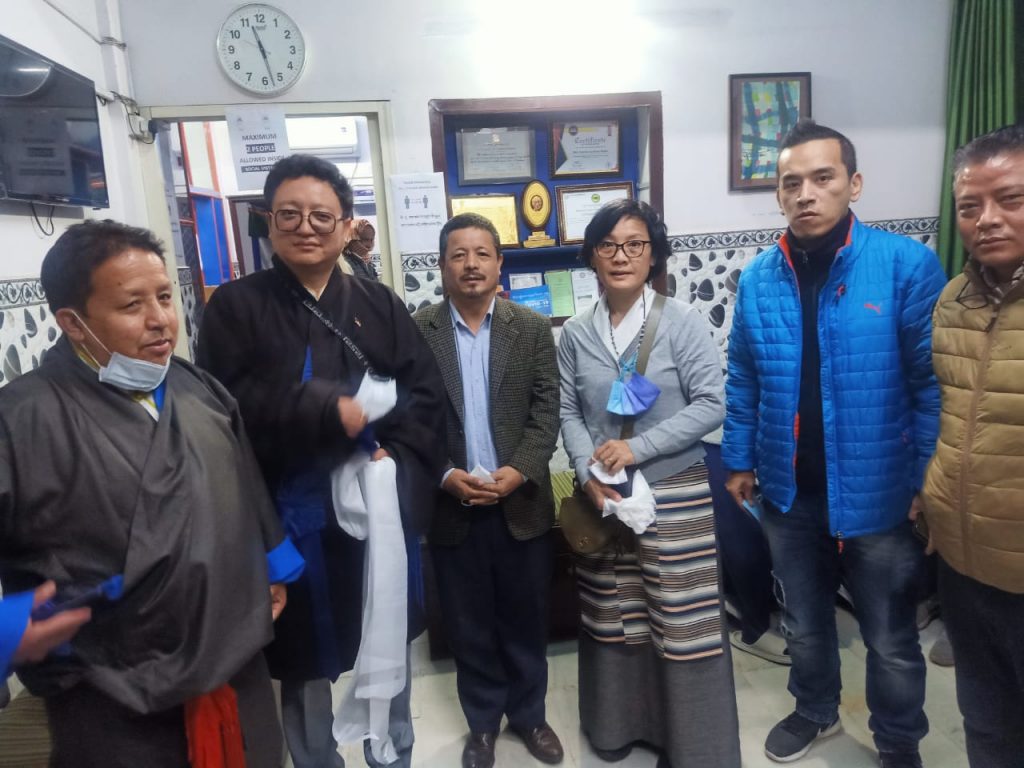 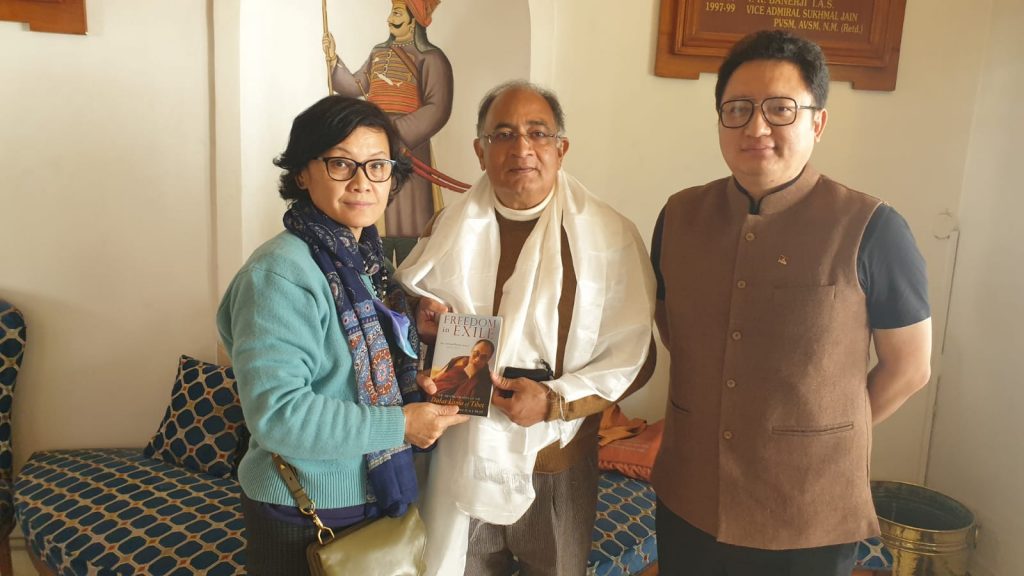 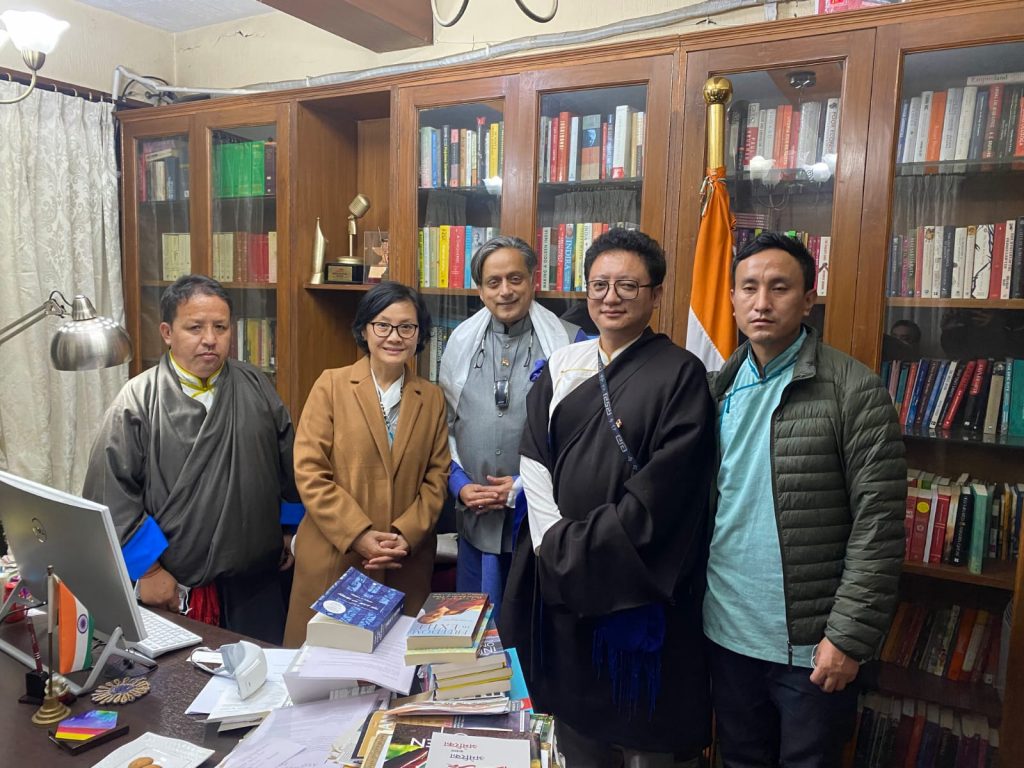 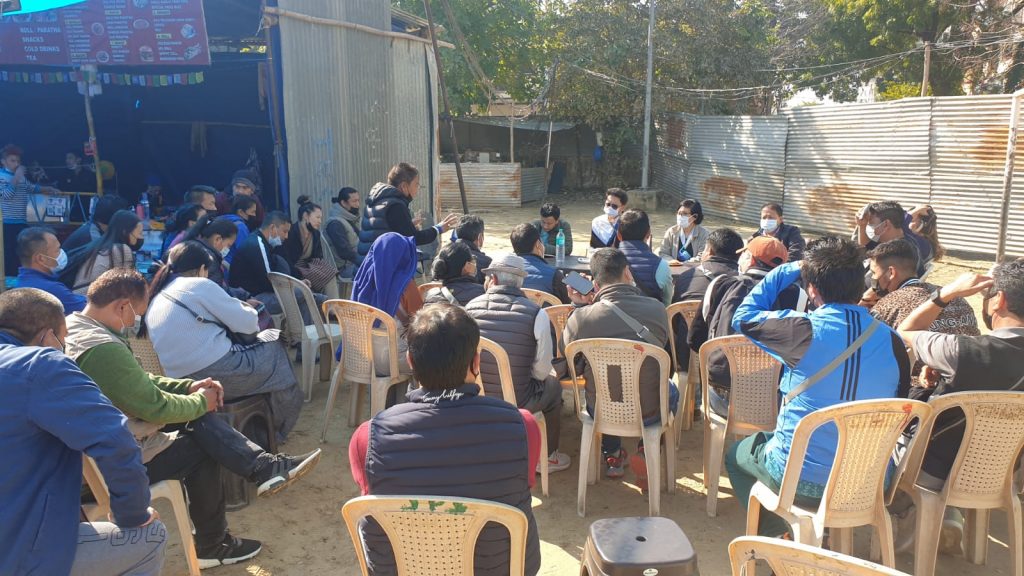 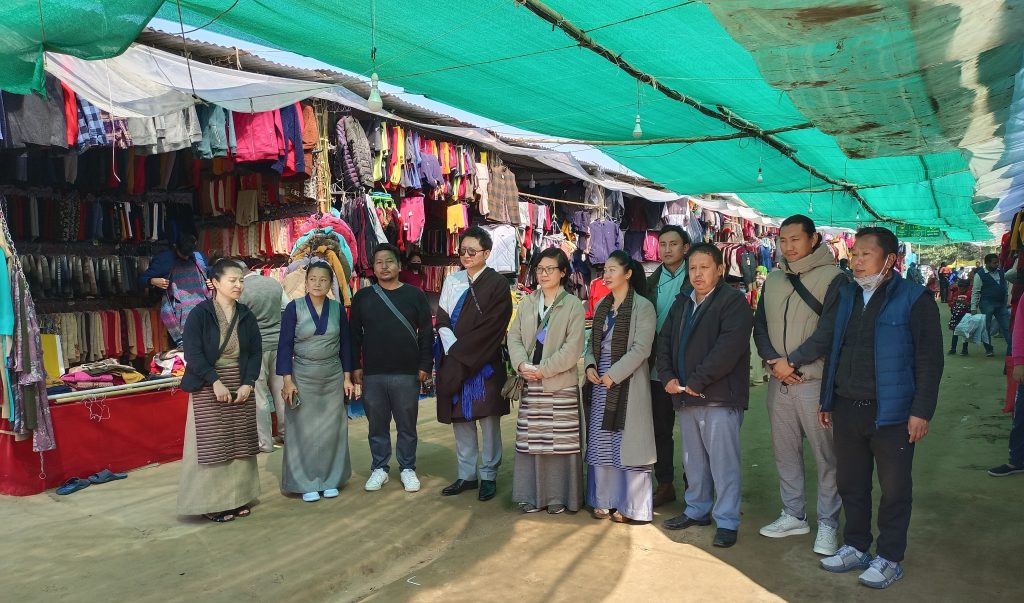 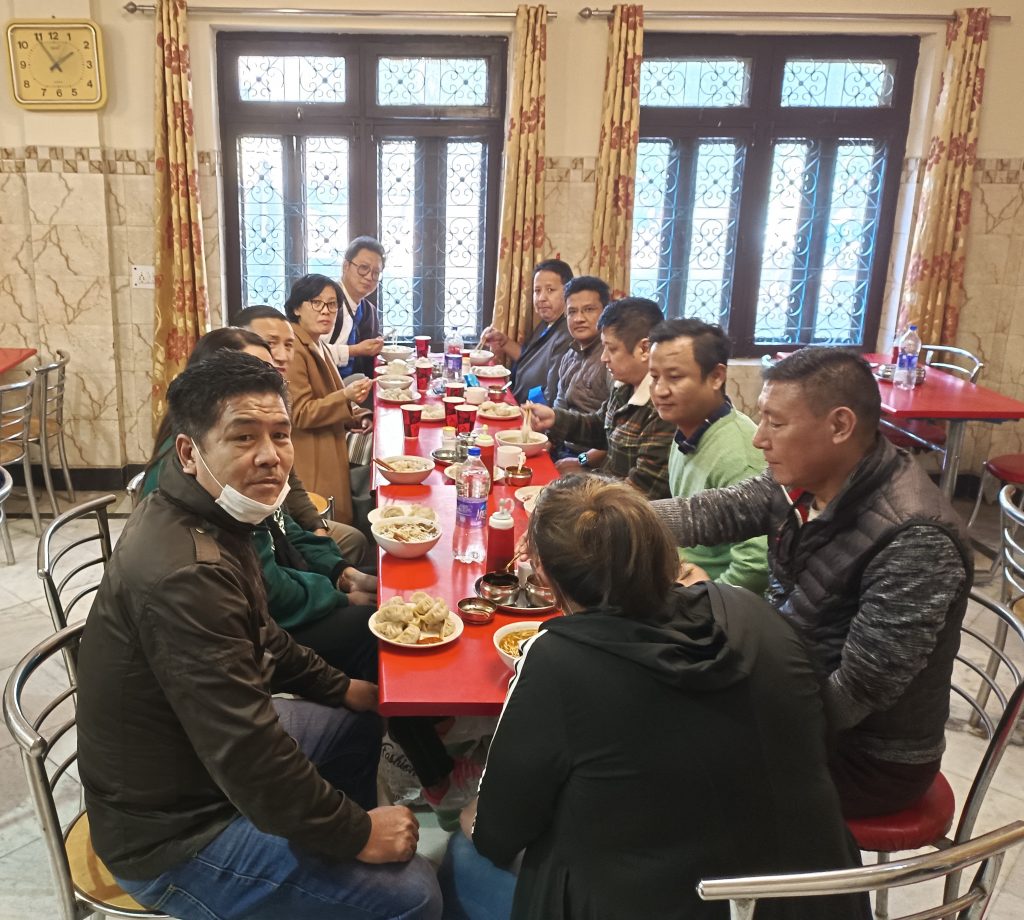 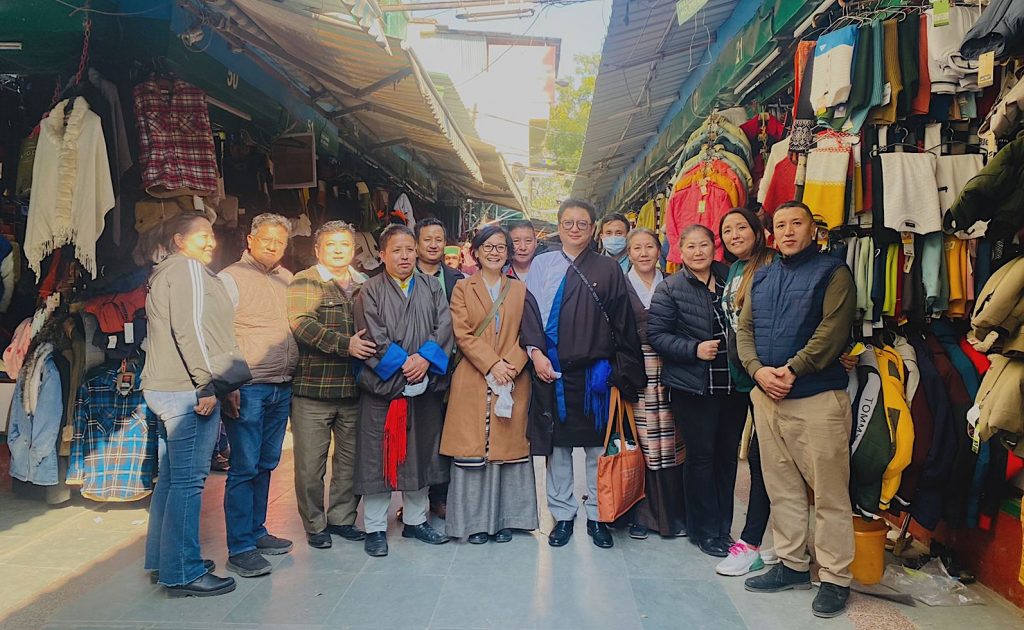 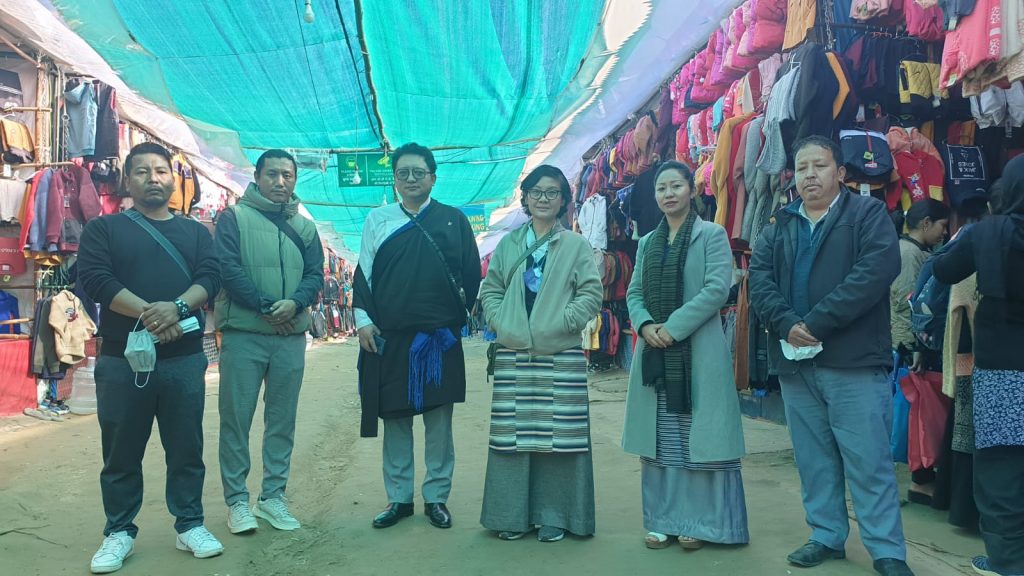