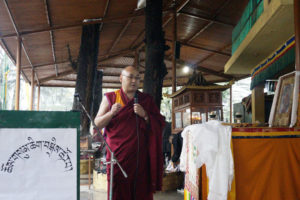 Lhagyal-ri, Dharamsala : Speaker of Tibetan Parliament-in-Exile, Ven, Khenpo Sonam Tenphal attended the commemoration of Zamling Chisang (Universal Prayer Day) as organized by Tibetan United Society at 7:30 am on June 28, 2018, the 15th day of the 5th month of Tibetan Lunar Calendar at Lhagyari-Ri, behind Tsuklagkhang, as per the invitation proffered by the organization. 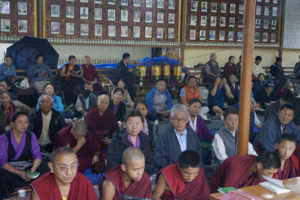 Members of Tibetan Parliament and the local Tibetan residents at Lhagyal-Ri on June 28, 2018. {P.C: TPiE)

After the welcome speech by the President of the Tibetan United Society, Speaker Ven. Khenpo Sonam Tenphel addressed the gathering by commending the organization for continuing the age-old tradition of celebrating Zamling Chisang in exile and also delved into its history.

Speaking on the benevolence and the protection of Tibet’s deities/gods, he said that His Holiness the Dalai Lama has especially composed prayers and verses for them and that it would be beneficial to engage in incense offering or Sang-sol (pronounced as sāŋsöl) in exile when the situations inside Tibet remains urgent.  He also spoke on the importance of continuing the customs and traditions of Tibet in exile.

‘Bod Cholkha-Sum (Three-Provinced Tibet) once belonged to the powerful empire among the China, Tibet and Mongolia in the southern part of the world. Thereafter, with the gradual disintegration of its empire and emergence of numerous principalities, the force of Tibet slowly dwindled along with its political strength and ultimately, to the present circumstances. However, we must always hope for the best and become an exemplary figure to the Tibetans inside Tibet. Sometimes, internal disruptions can occur within our community but we have to reach at a harmonious concordance by discussing the matter thoroughly,‘ said the Speaker.

Quoting His Holiness the Dalai Lama’s advise, Speaker reiterated that we as Tibetans belonging to the three-provinces of Tibet should be together in happiness and in suffering and therefore, it is important to always strive to do our best in every capacities. He also added that it is very important to work collectively while adhering to the advice of His Holiness the Dalai Lama. 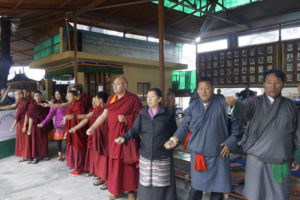 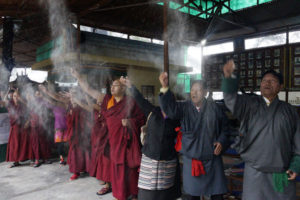