Speaker of the Tibetan Parliament in Exile, Mr Pema Jungney gave a Presentation about the Brutal occupation of Tibet by the Chinese and the Governance of Tibetan refugee in Exile 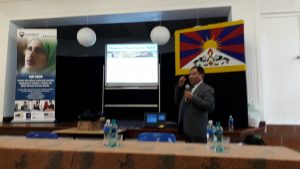 Speaker Pema Jungney delivers a presentation on China’s brutal occupation of Tibet and the Governance system of Tibetan refugee community in exile at Scalabrini Center to more than 60 participants including five members of Parliament from Inkatha Freedom Party, 14 February 2020.

Cape Town:   Mr Pema Jungney, Speaker of the Tibetan Parliament in exile delivered an indepth presentation on the brutal occupation of Tibet by the Chinese Communist Party since 1950s and the Governance system of Tibetan refugee community in exile at Scalabrini Center on the 14th February to more than 60 participants including five members of Parliament from Inkatha Freedom Party.

Speaker in his presentation first introduced Tibet, the Roof of the World, being a vast country – over two-thirds the size of India or more than two and half times the size of Austria, Denmark, France and Germany put together. It is a land rich in minerals and the variety of its flora and fauna. And, contrary to popular belief, Tibet is not entirely arid and barren – it has vast areas rich in forests, endless pasturelands suitable for animal husbandry and extensive fertile valleys. Surrounded by high snow-capped mountain ranges and dotted with numerous lakes, Tibet is also the source of many great rivers – the Yar lung Tsang-po (Brahmaputra), Senge Khabab (Indus), Dri-chu (Yangtze), Za chu (Mekong), Ma chu (Yellow), Gyalmo Ngulchu (Salween) to name a few.

Moreover, covering an area in excess of 2.5 million square kilometers, Tibet borders on India, Nepal, Bhutan and Burma to the south; with Eastern Turkistan to the north and withChina to the east. Tibet, therefore, commands not only the highest but also the most strategic position in Central Asia. The Tibetan people are a distinct race with its own spoken and written language, culture, traditions, food and dress. In 1959 the population of Tibet was estimated around six million. An estimated 1.2 million Tibetans have died as a direct result of Chinese illegal occupation.

Continuing the Presentation, Speaker then spoke about how Tibet’s three traditional provinces were divided into territorial sub-divisions and merged with China’s territory. Followed by illegal occupation of Tibet starting from 1949 and arrival of Chinese troops into Lhasa on 9 September 1951, Tibet has witnessed systematic destruction of monasteries, the suppression of religion, denial of political freedom, widespread arrest and imprisonment and massacre of innocent men, women and children. On 10 March 1959, the nation-wide Tibetan resistance culminated in the Tibetan National Uprising against the Chinese in Lhasa, Capital of Tibet. The Chinese retaliated with ruthlessness unknown to the Tibetans. Thousands of men, women and children were massacred in the streets, and many more imprisoned and deported. Monks and nuns were a prime target. Monasteries and temples were shelled. Which was followed by Tibetan Women’s Uprising in front of Potala Palace Lhasa on 12 March 1959.

Resulting in His Holiness the Dalai Lama’s escape in 17 March 1959 to seek political asylum in India. His Holiness the Dalai Lama was followed by 80,000 Tibetans into exile in India, Nepal and Bhutan. Never before in their long history had so many Tibetans been forced to leave their homeland under such difficult circumstances. There are now more than one hundred and fifty thousand Tibetan refugees all over the world.

Presentation continued with highlighting ongoing situation inside Tibet, explaining in detail about the violation of basic human rights, lack of religious freedom, restriction in keeping photo of His Holiness the Dalai Lama, destruction of Buddhist Monastic Institutes, environmental exploitation, and self-immolations of Tibetans inside Tibet.

Explaining salient features of Tibetan Democratic System, Speaker appealed the present attendees to bring about awareness on Tibet in your circle, community, etc., research, author articles, discuss about human rights in Tibet, urge leaders and governments to pressure China to stop the human rights violations in Tibet, urge China to engage with the representatives of His Holiness the Dalai Lama in meaningful dialogue and peaceful negotiation, do their bit, share the responsibility of Tibet’s struggle, look thoroughly into the trade relation that South Africa and China to make sure that it is not leaving or creating adverse effect on Tibetan ecology, culture and other aspects, and pass resolutions on Tibet and Tibet related issues in South African Parliament.

Hon Mr Narend Singh, the Chief Whip of the IFP spoke for a while why Tibet issue matters to his party which has been consistently supporting His Holiness the Dalai Lama and Human Rights in Tibet since for decades.

After the presentation by the Speaker Mr Peman Jungney which lasted about an hour, there was lively questions and answers session.

Speaker Mr Pema Jungney later had a meeting with Hon Ms Natasha Mazzone, a member of Parliament of Democratic Alliance Party and its Chief Whip in her Chamber at the Parliament Building.

Speaker Mr Pema Jungney later had a meeting with members of the Tibet Support Group, Cape Town who hosted him a dinner in his honour.

Speaker Mr Peman Jungney and Representative Ngodup Dorjee expressed their thanks and gratitude to Hon Natasha Mazzone for her support and the organizers of the seminar especially Mr Adam from the African Committee for Tibet. 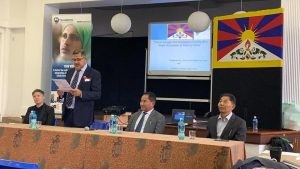 Speaker of the Tibetan Parliament in Exile, Mr Pema Jungney during his Presentation about the Brutal occupation of Tibet by the Chinese and the Governance of Tibetan refugee in Exile 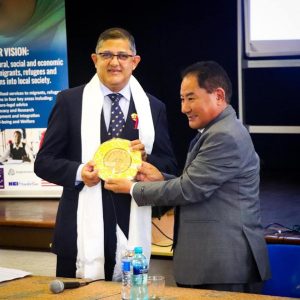 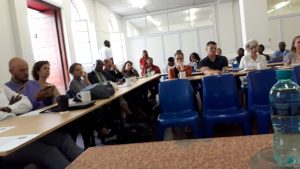