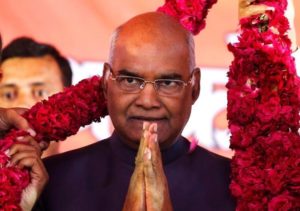 Dharamsala : Ven.Khenpo Sonam Tenphel, Speaker of the Tibetan Parliament –in-Exile, today wrote to Shri Ram Nath Kovind, the new President-elect of India, congratulating him on wining the 14th Presidential election,  on behalf of all the Tibetans inside and outside Tibet.

He wrote, ‘’On behalf of all the Tibetans, inside and outside Tibet, kindly accept our heartiest congratulation on winning the 14th Presidential election of India.

India has not only bestowed upon us an unparalleled support but also sheltered us with safety against adversaries, for which we remain highly indebted. We were able to preserve our identity, language and culture and even set up an administration in exile for the last 58 years.

His Holiness the Dalai Lama’s meeting with Presidents of India from Shri Rajendra Prasad to Shri Pranab Mukherjee in 2016 attest to the multi-faceted bond of culture and religion shared between India and Tibet.”

He further expressed his hope that the possibility of the resumption of dialogue between the government of China and the representative of His Holiness the Dalai would soon eventuate under his leadership.

Born on 1st November 1945, seventy-one year old Kovind is a Dalit leader from Kanpur, Uttar Pradesh. An advocate by profession, he served as a member of Parliament in Rajya Sabha twice from 1994-2000 and 2000-2006.