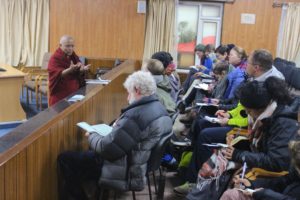 Dharamsala : A group of 15 students and two professors from the Denver University, USA, visited the Tibetan Parliamentary Secretariat. This visit is the part of yearly cultural exchange program initiated by Tibet World, an NGO founded in 2013 at McLeod Ganj, Dharamshala.

The Deputy Speaker Ven. Acharya Yeshi Phuntsok welcomed them and addressed them on the nexus of the Central Tibetan Administration as well as the composition and the functions of the Tibetan Parliamentary. He also elucidated them on the Central Tibetan Administration’s the source of financial aids, the proceedings of parliamentary sessions, its two sessions, their respective features, and the functions of the standing committee. Additionally, he briefed them regarding the World Parliamentarian Conventions on Tibet (WPCT), as well as meetings with various parliamentarians, think tanks and Tibet support groups, both nationally and internationally, to apprise them of the Tibet’s cause.

While explaining about the critical situations inside Tibet and the escalating number of self-immolations, he said, ‘we are not anti-Chinese nor are we spreading any propagandist campaigns. Propagandism will never garner genuine support. For instance, in Tibet, youth as young as 15 years old self-immolates for the freedom inside Tibet calling for the return of His Holiness the Dalai Lama despite the numerous attempts of cultural assimilation and propagandist campaigns by the Chinese government.’ He, then, entreated them to be au fait with the Tibetan history and its issue and seek support for the cause of Tibet from their respective parliamentarians and leaders based on its historical truth and facts.

He expressed his gratitude for managing their time and energy to learn about the Tibetan culture, its issues and facts. The group later dispersed after an interactive session of question and answers. 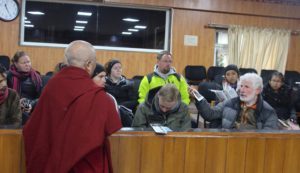 Professor from Denver University asking Deputy Speaker on the issues of Tibet during theinteractive Q&A session.