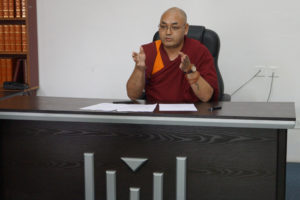 Speaker addressing the students and teachers from the 6th Leadership workshop. (05.05.18 P.C:TPiE)

Dharamsala : A group of 36 student captains and teachers from 18 Tibetan schools in India and Nepal, attending the sixth Leadership workshop for Tibetan school captains as organized by Department of Education, CTA, visited the Tibetan Parliament-in-Exile. 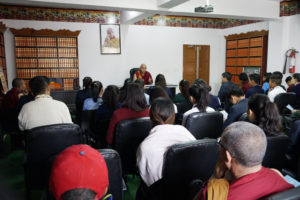 Speaker addressing the students and teachers from the 6th Leadership workshop. (05.04.18 P.C:TPiE)

He then illuminated the students and teachers on the composition of the parliamentary, its functions as well as the parliamentary proceeding and its business routine. He informed them in details the various committees as designated within the members of the Tibetan Parliament., such as Standing Committee, Budget Estimation Committee etc.

He also enlightened them on the various sources of fund for the Central Tibetan Administration and the different Tibet support groups as well as World Parliamentarians Conventions on Tibet (WPCT), whereby the Tibetan Parliament-in-Exile actively engages with numerous law-makers of various democratic countries to garner coordinated support for the Tibet issue.

Tibetan Parliament Speaker’s address was followed by question-answer session, wherein the students actively participated by posing questions and doubts to which the Speaker provided the requisite answers and clarifications. 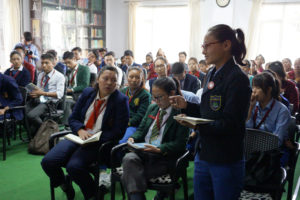 Click here to read the detailed speech in Tibetan.