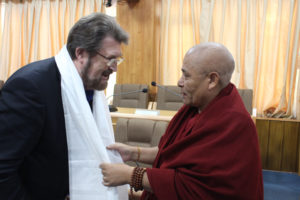 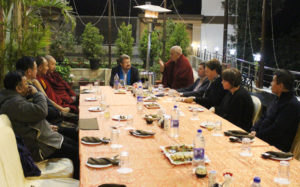 A dinner reception was hosted by the Tibetan parliament secretariat to the Delegation at the Norbu House, McLeod. At the dinner gathering, Deputy Speaker Acharya Yeshi Phuntsok welcomed the Delegation to Dharamsala and introduced the standing committee members. He informed them of different Parliamentarian support groups recieved at Tibetan parliament this year and the programs of 16th Tibetan Parliament-in-Exile to meet various Parliamentarian Support groups for Tibet across the world and intimate them about the Tibet cause. He recalled the resolution passed in the Australian Parliament and other achievements of Australian parliamentarian support group for the cause of Tibet. He also briefed them about the history of Tibet, especially post 1959 and the present situation inside Tibet and the composition of Tibetan parliament and its functions. 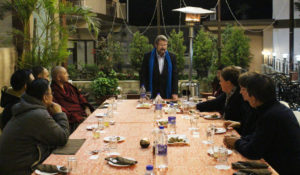 After that, Senator Mr Derryn Hinch talked about the recent meeting with the His Holiness the Dalai Lama in Delhi where he had shared the implications Chinese Government’s policy of massive influx of Han Chinese in Tibet. He also shared his experiences of visiting the Tibet Museum in Mcleod saying that the exhibition photos put up on wall reflected the historical transition of Tibetan political system from kings to the Dalai Lama and the Dalai Lama to the Chinese occupation that helps to understand the struggle of Tibet.

He said, “When we signed the book in the Tibet Museum, I wrote it was a great to see His Holiness again, 4 times in the past and hope the next time in 15 years will be in Tibet.”  He concluded by thanking the Tibetan parliament for hosting the welcome dinner.

Mr. Kevin Andrews, who said, he was a supporter of people of Tibet because of their desire for the Liberty, freedom, peace and living with dignity on this world. He commended the functions of CTA and its representation of the six million Tibetans aspiration. He also expressed his happiness to have been able to reach Dharamsala and learn more about the struggle of Tibet.

The reception lasted for more than 2 hour of discussions on various issues of Tibet followed by the presentation of mementos to the Parliamentarian delegation by the Deputy Speaker on behalf of Tibetan parliament.

Deputy Speaker and members of standing committee warmly received the Australian Parliamentary delegation at Tibetan parliament  on the next day. 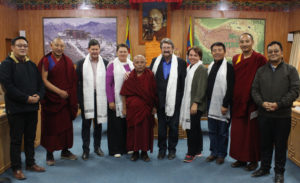