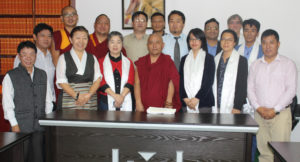 Members of the standing committee with the members of Human Rights Network for Tibet and Taiwan.

Dharamsala: The 16th Tibetan Parliamentary warmly received the members of the Human Rights Networks for Tibet and Taiwan’s founder and chairperson, Mr. Tashi Tsering, Legislative assistance Ying-Chun Liu, Executive Director Hsin-yi Lin of the Taiwan Alliance to End the DEath Penalty and other members of the network.

Executive Director, Hsin-yi Lin expressed her immense pleasure at the opportunity to receive an audience with His Holiness the 14th Dalai Lama and further said she was able to discuss on freedom, human rights, objectives of the Human Rights Network for Tibet and Taiwan and the growing awareness on Tibet’s issues amongst Taiwanese as well.

Mr. Tashi Tsering spoke on the political scenario of Taiwan and the strengthened endeavor to work for the Tibet’s cause. The dinner ended with a dynamic discussion amongst them after mementoes were accorded to the dignitaries. 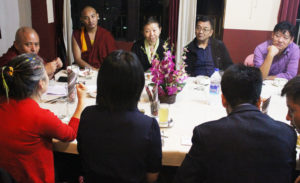 The dignitaries engaged in discussions while dining.

On Sept 7, the Taiwanese dignitaries visited the Tibetan Parliament-in-exile and Deputy Speaker elucidated on the Tibet’s past, present and future, two sessions of the Tibetan parliament, international Tibet support groups and its conventions etc.. After which, they engaged in question-answer session, wherein the Deputy Speaker answered the questions posed by the dignitaries.

Deputy Speaker answering to the questions posed by the Taiwanese dignitaries.

At the end of the their visitation, they handed over the letter to the Deputy Speaker by President of Legislative Yuan, Jia-chyuan Su through the standing committee’s assembly. 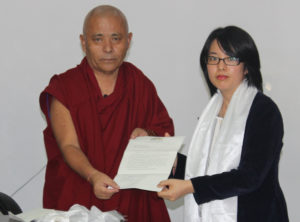