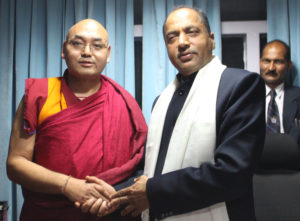 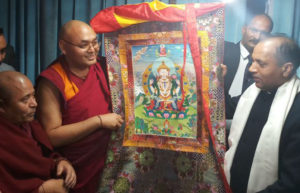 Speaker Ven. Khenpo Sonam Tenphel greeted the Chief Minister with khatak (tradition Tibetan ceremonial scarf) and offered a thangka painting of Avalokiteshwara on behalf of Tibetan Parliament Secretariat. During the visit, he was apprised of the Tibetan Parliament-in-Exile and the Tibetan struggle, both inside and outside Tibet. He was also presented with books and pamphlets on His Holiness the Dalai Lama, Tibet’s history, Self-immolations in Tibet, 6th World Parliamentarian Convention on Tibet and various other publications by the Deputy Speaker Ven. Acharya Yeshi Phuntsok. He also expressed his gratitude to the people and the government of the state for the all the support and facilitation rendered to the Tibetan cause and solicited the opportunity to call on the members of the Himachal Pradesh legislative assembly during their oncoming winter session in Dharamsala. 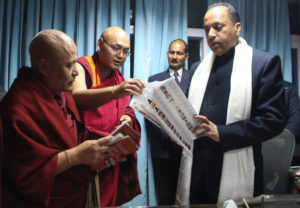 Apprising the State’s CM on the escalating number of self-immolations in Tibet at Circuit house, DHaramsala on Jan 31. (P.C. TPiE) 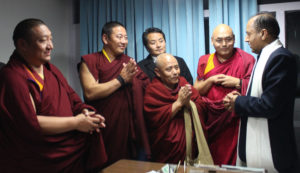